Edit: I've decided to add more of my AWFUL maps to help visualize the many different locations I'm describing.

At this point in the campaign, I think we had about 4 sessions under our belt. I decided that I wanted to allow the players more control over what their characters did each season, and so I took a break from the usual, "Chieftain tells you to do this for the good of the clan, so do it." Instead I started giving them a quick overview of what the clan folk were doing week by week, dropping rumors, and sharing news about what the other clans and neighbors were up to. My hope was that they would either choose something interesting to look into, or come up with a scheme of their own.

At the beginning of the Storm Season, the events were as follows-

Erindros agrees with the chieftain that feuding with the Togarth would be a bad thing, and cattle raiding may not be enough to satisfy the hotblooded warriors. He comes up with a plan that will hopefully improve relations with the Togarth, and also let the warriors test their mettle.

Storm Season: The Big Raid (or, Everyone Hates the Sambari Tribe) 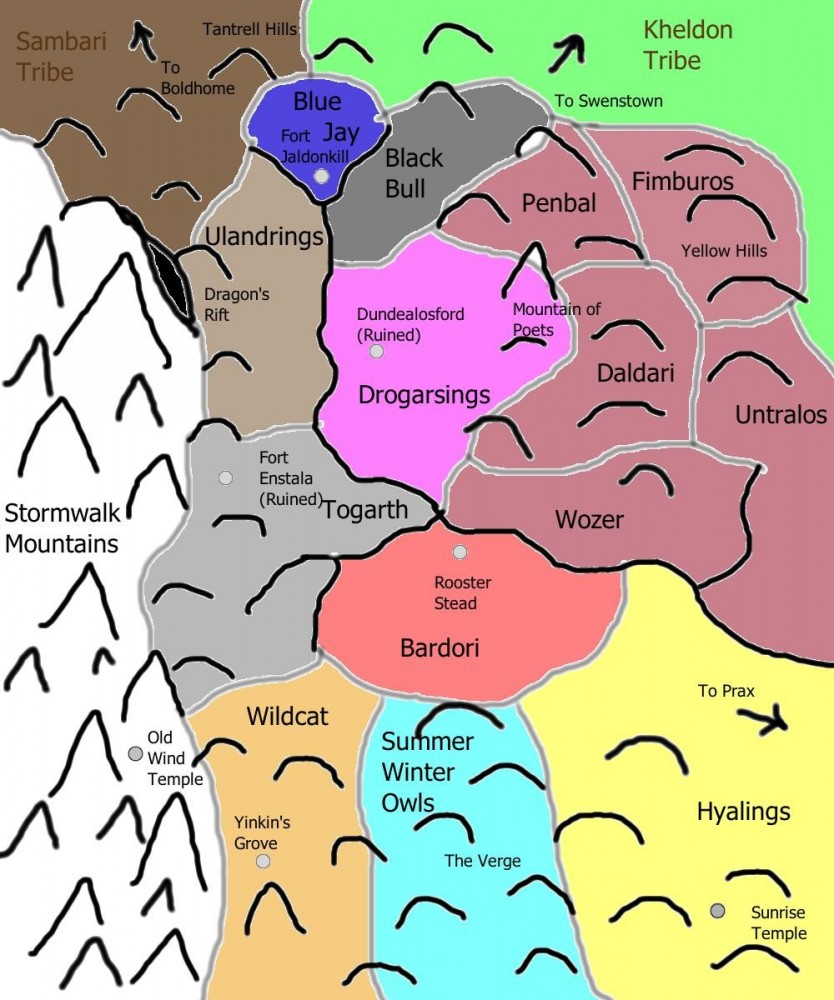 Erindros' idea was this. He, Egajia and Garkar would go to the Togarth chieftain as emissaries, bearing gifts and offering to smooth over recent disputes. They would then propose a joint raid as one-time allies against a common enemy: the Sambari Tribe to the northwest. The Sambari are famous thrallholders, and many of their clans once paid annual tribute to the Togarth, who would go raiding against them otherwise. Since the Dundealos Tribe was disbanded, they have not had to worry about this of course. Raiding one of their clans, specifically the Rastorlings, would help to reestablish the old tributes. The Bardori have no quarrel with any Sambari clans (except for Garkar of course), but they would benefit by liberating and adopting more thralls.

Erindros and Egajia convinced the chieftain and the Inner Ring that this would be a good idea. They then had to visit the Togarth chieftain, Arnsulva One-Eye, and convince her. The party got a cool reception at first, and had to suffer various insults from Arnsulva, a Vingan warrior. Then Garkar, bolstered with magic and fueled by his irrational hatred of the Sambari, convinced the Togarth thanes that the thrallholders needed to be taught a lesson. He also impressed the chieftain, and plans for a joint raiding party were agreed upon. The Togarth would send the chieftain's eldest daughter Orane, a warrior of Humakt, and eighty warriors. The Bardori would send one hundred, led by the PC's and a member of the Inner Ring named Leif Lightspear. Leif was a Sun Thane of Elmal, and originally from the Pol-Joni. Before setting out on the raid, the clan prepared with rituals and prayers to their war gods (mainly Orlanth, Elmal, and Humakt). The chieftain presented the Black Arrow to the clan's warriors, and took part in the masked war dances.

The next morning the raiders set out north, and met up with the Togarth contingent on the way. Rastorling lands would take a full day and a half to reach. On the way, the raiders would have to pass through the Ulandring clan's territory. The Ulandrings are a Dundealos clan, and in my version of the setting, are the more cool-headed parent clan of the Togarth. They allowed the party to pass without issue, and even allowed a few of their own warriors to join the raid. The Rastorling clan (I can't remember if I made them up or not) are based in the northern Tantrell Hills around a hill fort, simply called Rastorl's Fort. The raiding party camped for the night at the edge of Ulandring territory, then struck out the next morning. They stayed under the cover of woods as they approached the fort, and Garkar scouted ahead to help everyone avoid the border patrols. The raiders managed to reach the fort itself without being discovered, and were thus able to strike before the full Rastorling militia was prepared. The fort's defenders numbered about 100, including the farmers nearby who took up arms.

Before the two sides clashed in battle, challenges were called out. One particularly obnoxious warrior named Orlestan "Mad-Beard" was getting under Garkar's skin, and he met the warrior's challenge. Unfortunately, Orlestan had a Lightning spell prepared, and nearly blew off poor Garkar's sword arm. Garkar decided the duel wasn't going well, and used his Leap spell to get safely back to his allies, and Egajia's healing magic. The battle was then met. The raiders outnumbered the defenders, and again Erindros' leadership skills in battle helped to win the day. The defenders were driven back into the fort. Rastorl's Fort boasted a high stone wall and a stout gate, and the raiders had little hope of breaching it. Erindros realized however that the Rastorlings' most valuable assets, their thralls, were also likely imprisoned in the fort. He went to the front gate, dodging arrows as he went, and attempted to rouse the thralls within to fight back against their captors, and open the gate for their future liberators. Perhaps sensing an opportunity, the thralls within (who now outnumbered the Rastorling defenders) responded, and after a short brawl within, raised the main gate for the raiders. They swarmed into the fort, and the looting began.

The raid was a success. The Togarth warriors were allowed to take the larger share of silver and loot, while the Bardori rustled the cattle, stole food, and rounded up as many thralls as they could find to offer them freedom. Erindros, Egajia and Garkar were overseeing this process when they noticed something odd. By this time, it was late afternoon, and the sun was sinking low. Yet, from the southwest, a massive shadow was quickly approaching. It looked as if night was falling, but only over a region a few miles across. Suspecting that some foul magic was at play, they ran off to warn Leif and the other raiders. No sooner had they done so, when a cold shadow swept over the Rastorlings' entire tula. The sun became a dim blot in the sky, and general visibility was reduced to only a few meters. Soon after this, the PC's began hearing terrifying howls, grunts and squeals. A band of trollkin wielding spears came loping out of the darkness, and tried to engage the party. Egajia also sensed through Second Sight that other, more powerful creatures were staying hidden and watching in the darkness. They all decided unanimously that they were too spent to fight any kind of troll, and retreated. The trollkin couldn't keep up with them, and they escaped successfully.

Unfortunately, the darkness combined with the bewildering noises made it difficult to find their way, and everyone became lost. After a few hours of wandering, the strange darkness dissipated, and gave way to actual night. The PC's found Leif Lightspear and other Bardori warriors under the effects of a Sunbright spell. They learned from him that trolls had swept in to take advantage of the chaos and carry off prisoners and cattle. The giant shadow was apparently a massive elemental, of the kind found in Shadow's Dance. Among the prisoners taken was the Togarth chieftain's daughter, Orane. The party was then faced with a difficult choice. They felt they needed to save Orane, as it was the honorable thing to do, and it could also potentially put the Togarth chieftain in their debt. By this point however, they had spent their rune magic, and other resources as well (augments, MP). Still, they decided to follow the trail of the Uz war party (which was not hard to find at all). Their quickly improvised plan was to ask Leif to use his remaining rune magic to distract the trolls, while they crept in and rescued Orane.

The trolls had left to the south, into thick woods. The party borrowed horses, and rode along with Leif and a few others to follow them. The trolls left a trail of mangled brush and discarded bones that was not hard to follow, even in the dark. The rescuers found that the trolls were traveling with several giant rhinoceros beetles, laden with spoils (mostly food), and crude cages to store prisoners. These were mostly Togarth warriors, many wounded and unconscious. There were dozens of trolls present, and twice as many trollkin. Thankfully, Leif's distraction worked as he blinded the trolls with light, and set trees on fire. Most of them gave chase. Garkar and Erindros freed as many Togarth captives as they could, but were not able to heal those who were otherwise too wounded. They found the chieftain's daughter, who was unconscious, and carried her back to the horses. Several trolls noticed the heroes escaping, but Egajia still had plenty of MP left for Sleep spells. They escaped, as did Leif, and the trolls did not bother pursuing.

The group had to go the long way around Rastorling land and avoid their patrols again, which they managed to do. They were reunited with the raiding party, and breathed a collective sigh of relief. All in all, the raid could still be counted as a success. The Togarth were furious at having their men taken as food by the trolls, but none of them blamed the Bardori or the PC's. Orane, when she came to, gave them her thanks. The raiding party returned the way they had come. Arnsulva One-Eye praised the PC's heroism at rescuing her eldest daughter, and threw a feast to celebrate the successful raid. While she could not be convinced to set up a permanent alliance between the two clans, she admitted that she was in their debt.

Originally I had planned to make Sacred Time a separate adventure unto itself, but the timing didn't really work out. Instead it was treated as part of the seasonal off-time. I narrated the story of the Lightbringer's Quest, and each PC took part in a ceremony for their respective gods. Egajia was off in Prax for most of the two weeks, celebrating Daka Fal's high holy days. Here is how the Sacred Time sequence from the core rules worked out for everyone-

"The Red Moon waxes bright, Chaos grows strong. A foul wind blows from the East. A great house shall fall, and after comes war and darkness."

The spilled blood from the cockerel then moved of its own accord, and formed into the distinctive shape of a woman holding two curved swords.

Next time, Sea Season 1626. The next season actually contains multiple adventures, so I will summarize it in 2-3 entries. Thanks for taking the time to read about our campaign!