Preparing for the Expedition

For this session, we played without Egajia. Because everyone was heading into Prax again, and she was ready for her shaman initiation, we explained this by saying she had ventured out early to meet with her mentor and prepare. The other three party members would organize the caravan, and meet with Egajia at the Paps.

Here is the route that everyone decided on for reaching Pavis. 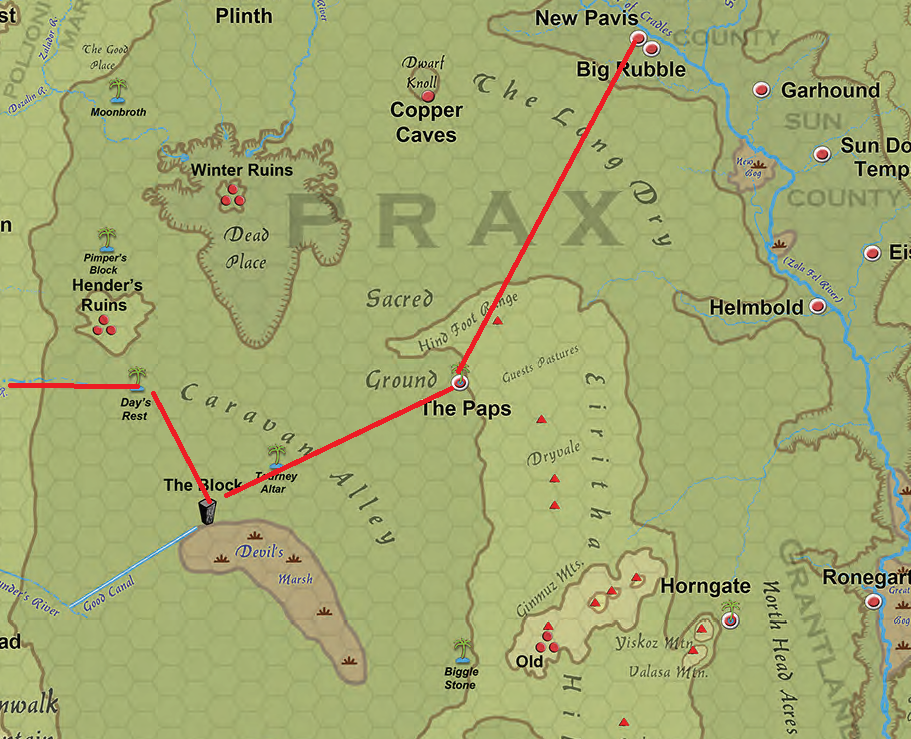 The party divided up their loot from the raid on Ft. Enstala, and made some purchases. They gave a portion of the goods and silver they found to the Togarth clan, another portion to the Bardori, and some for personal use. The rest they put aside to purchase trade goods, supplies, pack animals and steeds. I allowed them to purchase animals on loan from various sellers around the valley, so they ended up with three pack mules, two bison, and a sable antelope at a discount price.

The heroes had achieved a small measure of fame for successfully looting the ruined fort, but their chances of returning alive from Prax were still seen as not good by the clan's elders. They set off on their journey with little fanfare. As they passed through the neighboring Hyaling clan's territory, He Who Spits decided the caravan needed more hired guards, and grew very excited at the prospect of hiring some "real native baboons." There happened to be a mercenary troop camped near the household of the Hyaling chieftain. HWSAC continued the party tradition of botching Communication skill rolls while negotiating for rates. The alpha baboon would only offer the services of two green recruits, but Erindros still managed a good price for their services. Thus, baboons Kurruk and Garr joined the caravan.

Day's Rest and the Block

After roughly three days of travel, the party arrived again at Day's Rest. The oasis had changed somewhat since their visit back in Earth Season 1625. There was a great mustering of Praxian warriors, several hundred in all, from four different tribes. Erindros learned that most of them were riding to Pavis, where Argrath White Bull was gathering his new army. He saw a familiar face among the Bison Riders, the very same Storm Bull warriors who rode with them to hunt the wicked shaman (see the second blog entry). Their leader, Mokwar, greeted them as friends. He and his band were also traveling to Pavis to join the White Bull's army. Before they did so, they planned to travel to the Block with a young member of their clan, a boy of 16 named Argwaha. The young lad was preparing to initiate into the Storm Bull cul t, but before he did so, he needed to visit the Devil's Marsh and kill a creature of Chaos.

Erindros and the rest of the party were undecided on whether they wanted to make a detour to the Block. Mokwar told them that he would consider it a favor if they could accompany young Argwaha, and act as witnesses for his initiation trial. He also offered to give them the name of his cousin, an Issaries trader at the Block, who was known to trade in precious Truestone. The party agreed, and Mokwar and his Storm Bulls left immediately for Pavis.

Argwaha proved to be something of a handful. His desire to kill a creature of Chaos was somewhat unsettling, and he saw enemies in every shadow. The journey to the Block took a day and a half, and when they arrived, they didn't have time for sightseeing. Argwaha immediately dismounted his bison, and ran off screaming in the direction of the Devil's Marsh. The PC's followed in hot pursuit. HWSAC had been to the Devil's Marsh on several occasions before. Although he had also shown little restraint around Chaos creatures in the past, now he was cautious, having seen many good men lose their lives to the Marsh. He encouraged Argwaha to show caution as well, but the boy was scornful and bellowed challenges to any creature who could hear him.

After a few hours of mud, quicksand, leeches and mosquitoes, the landscape of the marsh took a more Chaotic turn. Soon there were tentacled trees, whispering puddles and frogs that shrieked in human voices. Argwaha finally blundered into a broo hunting for its dinner. The broo defended itself against his attack, while secretly it's mate lay hidden in the bushes from all eyes present. Everyone else initially stayed out of the fight, only casting protective magic on Argwaha. But then the hidden broo threw a javelin, piercing the boy in his side. The first broo took advantage of this and drove it's own spear into his leg, impaling him. Argwaha fell to the ground, but stayed conscious. Garkar flew at the hidden broo, trying to drive it off. Erindros healed Argwaha in time, and HWSAC "shared" a portion of the Bull's rage by casting Fanaticism on the young warrior. Argwaha rose up and then struck a mighty blow in the broo's most vulnerable location (you know the one), killing it at once. Garkar crippled the other broo's leg, and allowed the boy to finish it off as well. With two bloody broo heads to bring back for the Bull priests, the young Praxian had succeeded. He thanked the party for their help, and apologized for his rash behavior earlier.

Upon returning to the Block, everyone found that a raucous celebration was beginning. This was no great surprise, as people were always getting drunk and celebrating there, and there was no particular reason for it other than surviving another day. When the Praxians there learned of Argwaha's success, the party grew more wild still, and everyone broke out the bison kumis. Erindros managed to drink a seasoned Storm Bull warrior under the table (he has unusually high CON), while HWSAC was doomed to suffer a hangover the likes of which he had never experienced before. The next day, the party located Mokwar's cousin, and presented a token that he gave to them. The trader revealed his hidden wares, several shards of valuable truestone. He drove a hard bargain for it, but Erindros managed to drive the price down slightly, and purchased three good-sized shards.

Argwaha planned to stay and complete his initiation rites, and the party was free to venture on to their next stop, the Paps.

Next time, I will have finally caught up to the present session! The party will reunite with Egajia at the Paps, and she will attempt her shaman initiation rite. Thanks for reading!