This years Kraken was shorter than the biannual Gaming Vacation we have gotten used to from the Kraken team, but not having to wait another year for it I was quite happy with a shorter Gaming Retreat. In preparing for Kraken 2015 I found excellent use for the Guide of Glorantha. It worked perfectly as a bookpress for the booklets I was bringing for the Chant-Along event! 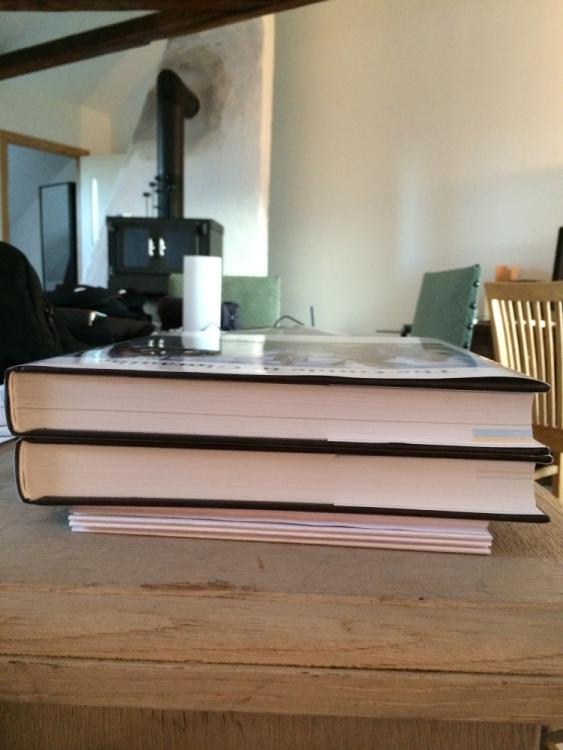 This year I went down with 3 other Norwegians - Linda (my highly pregnant girlfriend) Jaran and Morten (a Kraken virgin). Me, Linda and Morten took the plane to Berlin on Friday and drove a rented car to Schloss Neuhausen, 2 hours north-west of Berlin, where Kraken is hosted. The Shuttlebus brough Jaran and the rest of the Krakeneers, but as it got stuck in traffic we started the convention with some quiet and relaxing hours at Schloss Neuhausen. 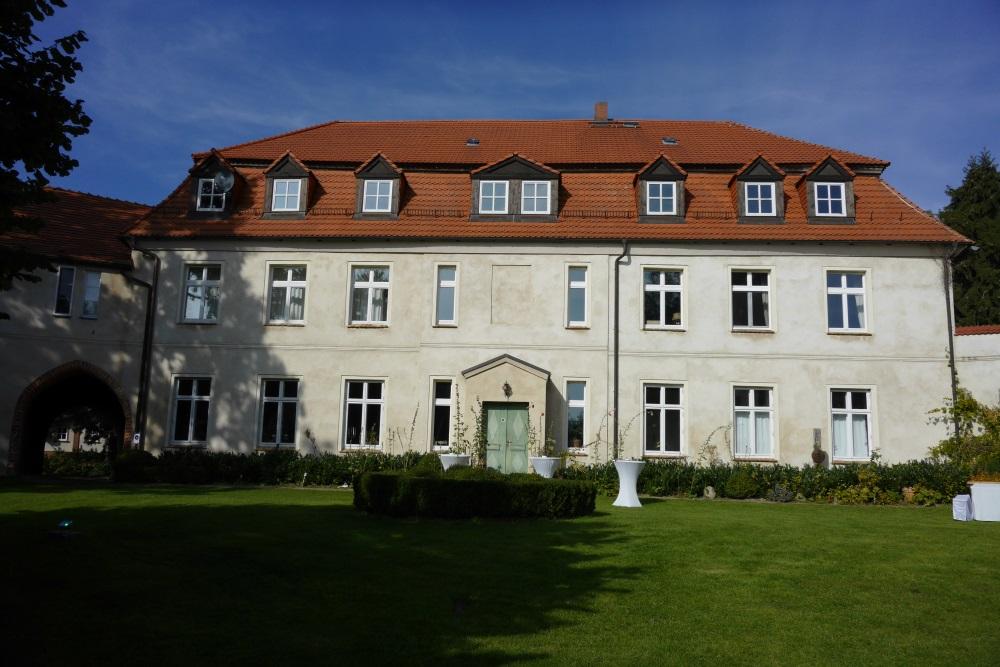 When the ShuttleBus finally arrived, it was time for the opening ceremony which was held by the Kraken head organizer Fabian: 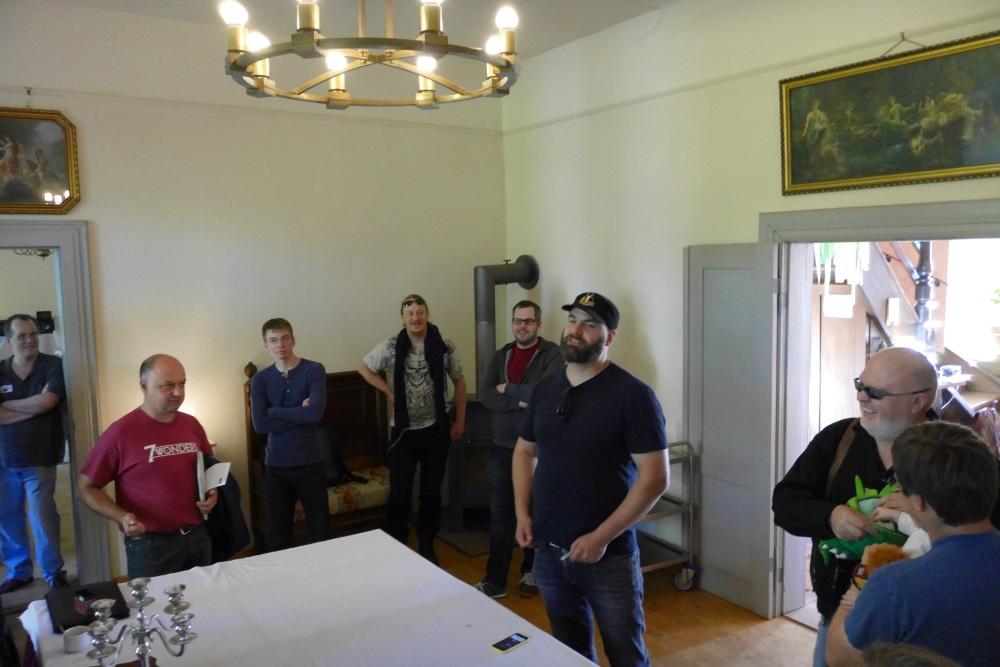 We had a late night game called "The Omega Option", a Needles and Pins game created and GM'ed by Philip. It was a lot of fun, but due to player screw-up it ended early after about 3 hours with everyone getting sucked out of existence (maybe into a parallel dimension called Universe #1, we'll never know).

Saturday started early with the game "Carry on up the Kartolin" a scenario written by Pete Nash for RQ6 (in Glorantha), GM'ed by Mark who had just gotten back to gaming after a long hiatus. We played a chaos infested lunar troop and my character was an ogre with the "Cook Sapient Flesh" skill and a frying pan in his inventory. Only heavy GM railroading kept prisoners and other players from my frying pan... 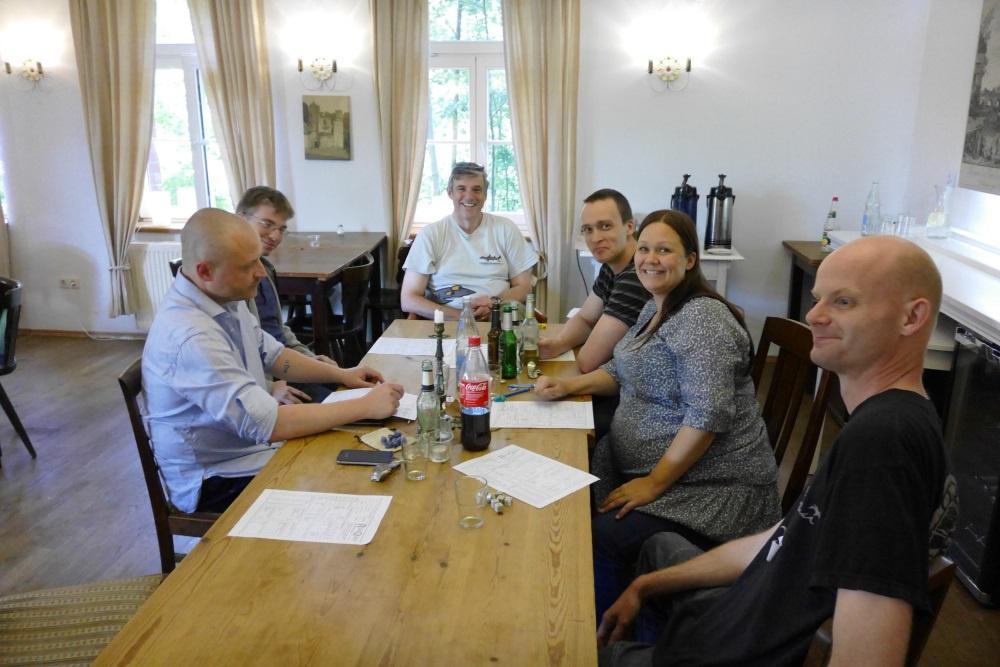 Later the same day, we had Axe throwing and Bow practice under the guidance of Risto, one of our Finnish friends. No major injuries this year either! 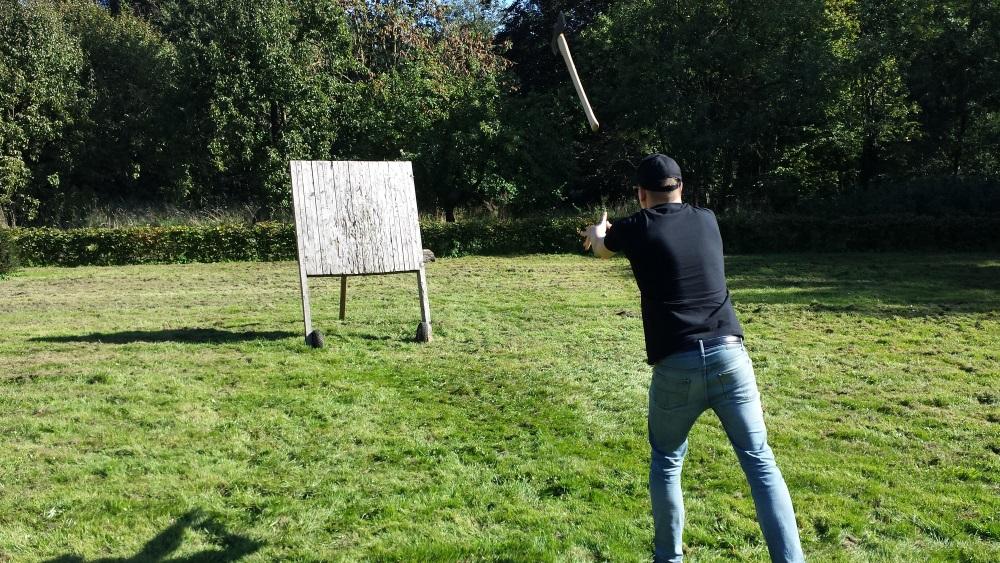 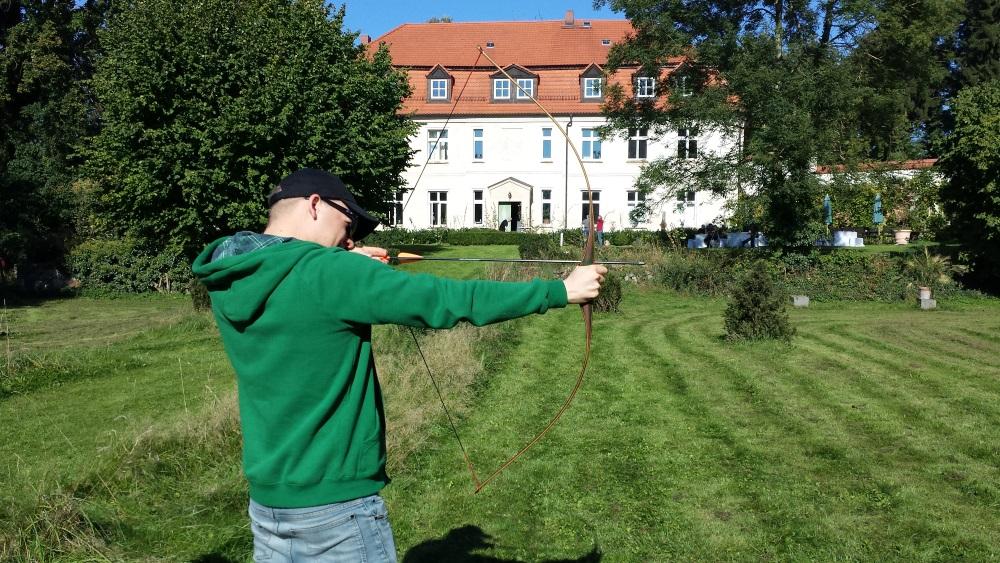 Then I attended Chaosiums seminar by the name "What's up Chaosium?" hosted by Jeff, Neil and MOB - the contents of which has already been discussed in the forums.

Ending that day was the Chant-Along-A-Squid - where we chantet/sung/screamed the ancient lyrics of familiar tunes to summon the old and outer gods. It was the best Chant-Along I've hosted so far, but alas, the world is still not overrun with monsters, so better luck next year! 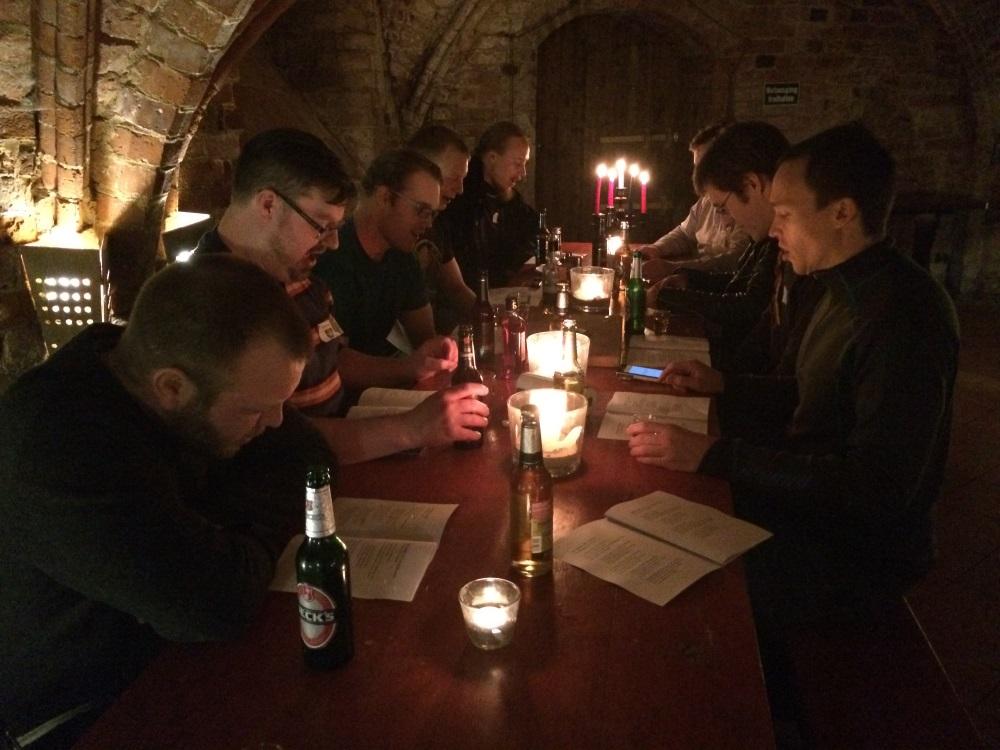 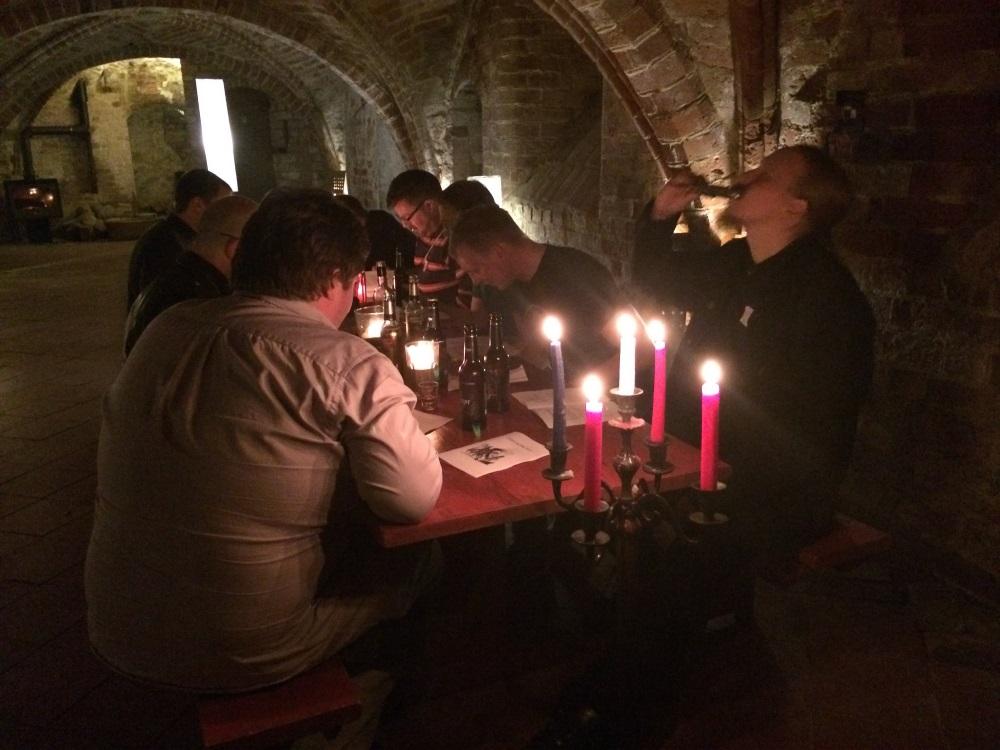 We ate a heart during the Chant-Along. It looked human. I'm not saying it was human, but I'm not not saying it either. It went down with Norwegian potatoe-spirits. 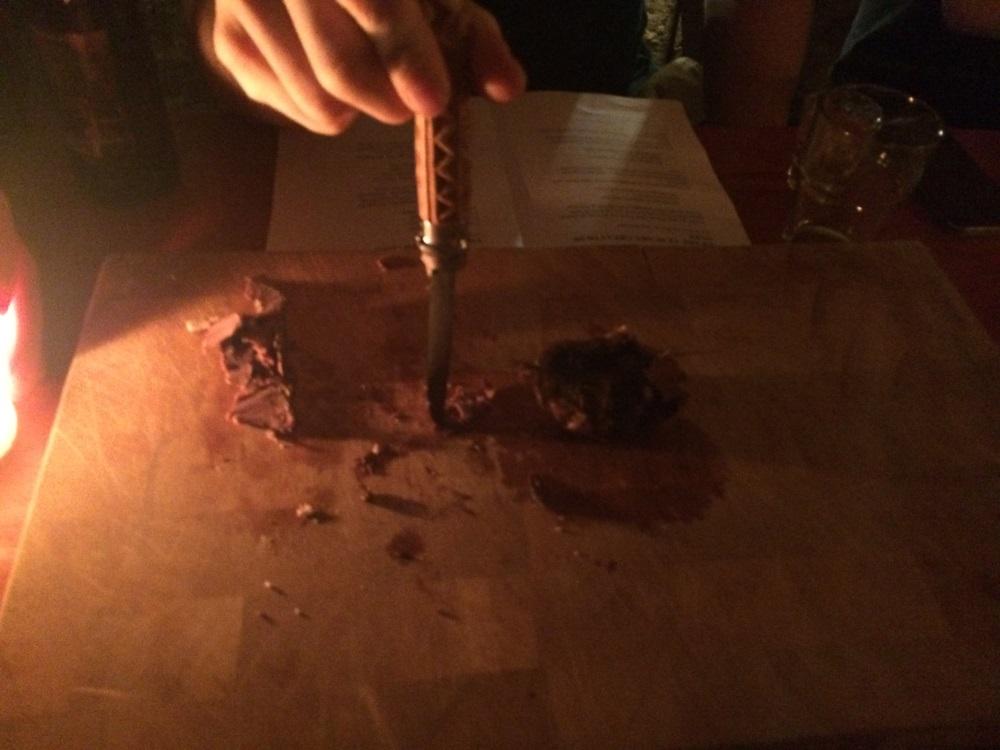 Sunday, last full day of the convention, we started with the game "Akkadian Stars" - a science fantasy scenario by Jason Durall, using Magic World rules. Lot of fun! And we survived! 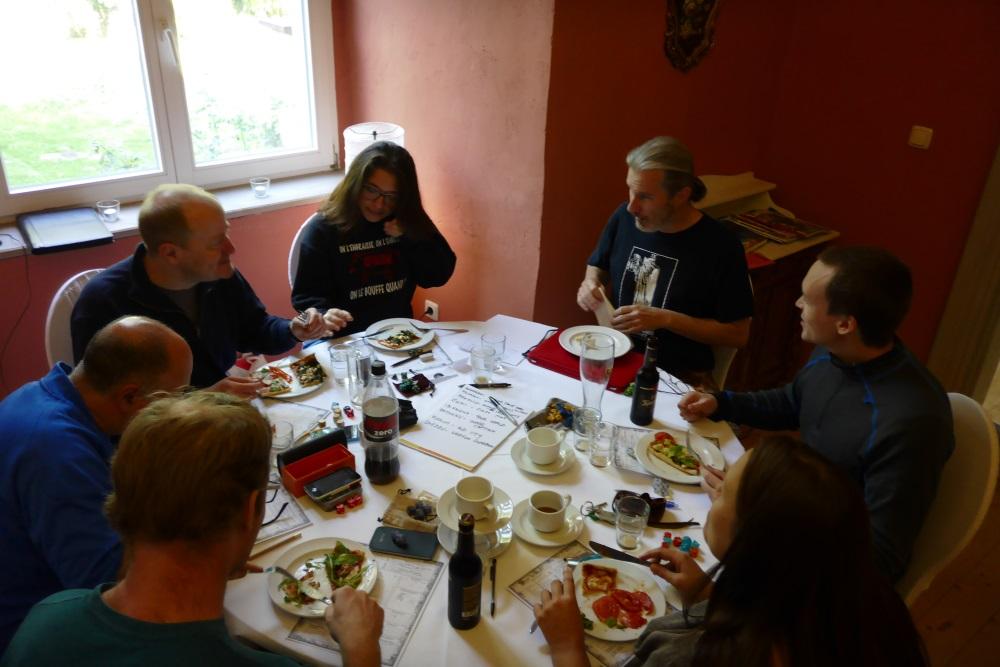 Then we had the pancake wars - Finnish vs. Belgian Dutch pancakes. The Finnish took the victory. It took several hours before I recovered from the huge one I ate. 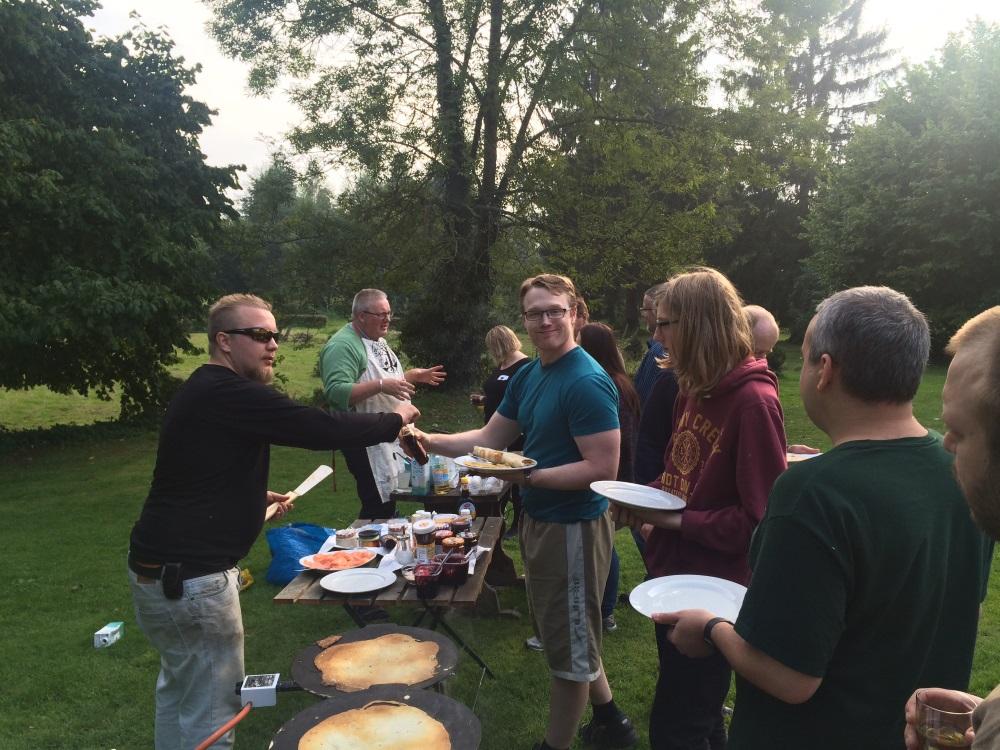 Later I had a productive talk with Jeff, Neil and MOB (the Chaosium guys at the Con). We'll get back to this in a few days.

Closing ceremony Sunday Evening to mark the end of another great convention at Schloss Neuhausen, with the guests of honor in front: 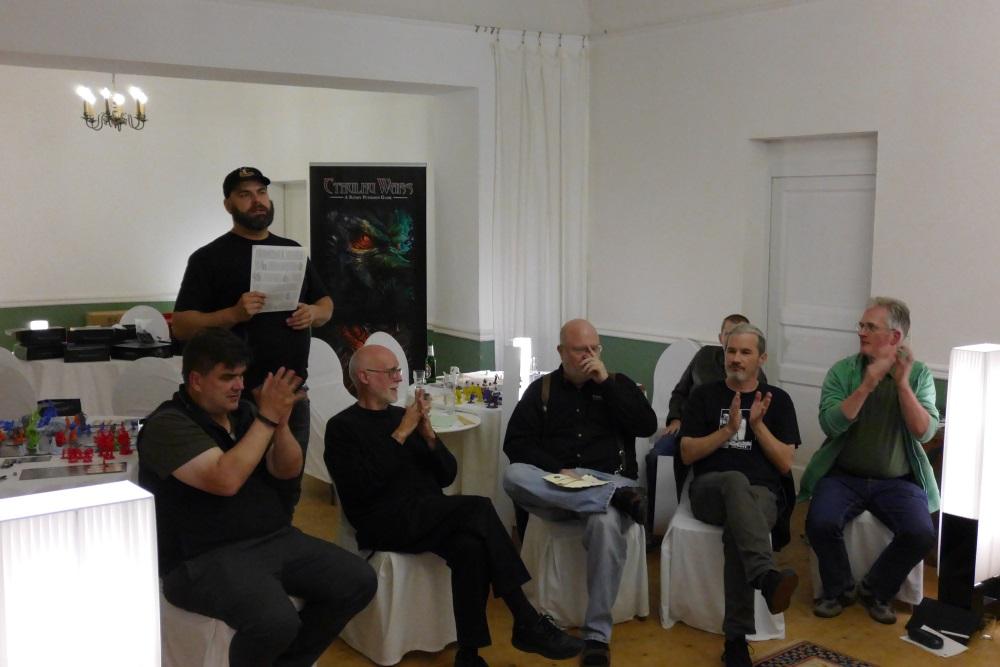 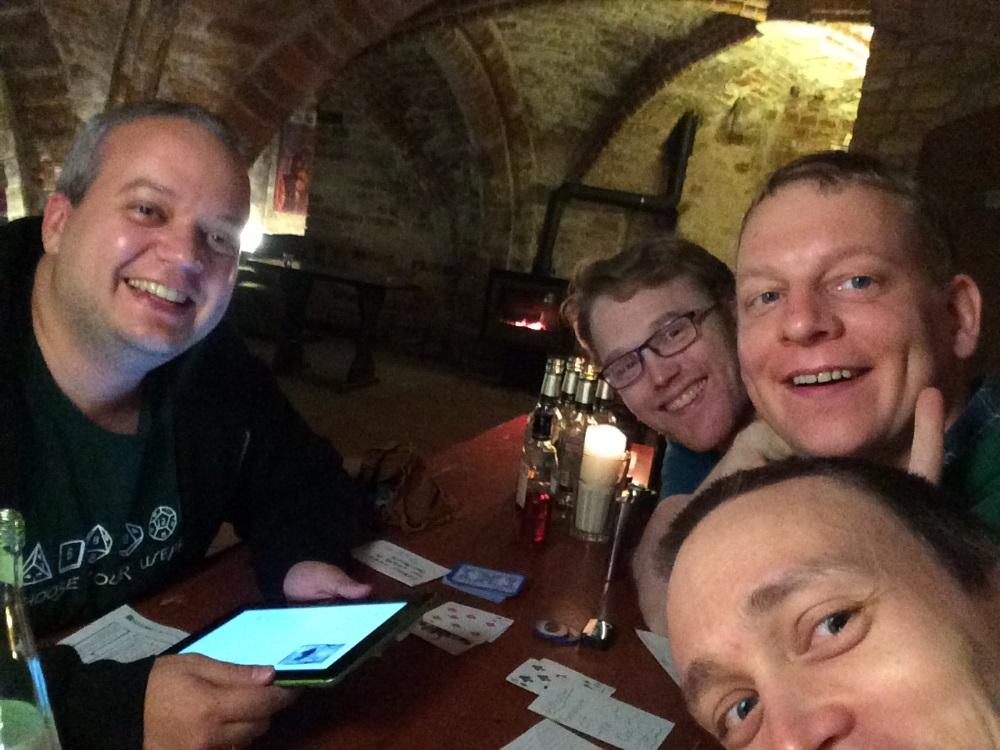 An that was it! Now we have to wait an entire year for more! It comes with my highest recommendations. If you have the chance to attend next year, grab it!