I have decided to start writing recaps of my ongoing RQG campaign, which is centered on the Bardori clan in Sartar, of the Dundealos Tribe. I've been feeling like it would be helpful to get myself writing regularly again, and I would like to have some sort of record of our campaign. Hopefully, folks will also enjoy reading about an ongoing story in the relatively new RQG system. I began my current campaign back in March. My plan is to quickly cover the background and events of the campaign so far, and then hopefully write more detailed coverage once I catch up to the present.

After immersing myself in Gloranthan material for many months, I found myself struggling to find the right framework for creating a campaign. There was simply so much lore and background information to absorb, I didn't know how to do it justice. Then I discovered The Coming Storm/Eleven Lights, which inspired me to run a campaign focused on a single clan in Sartar. This seemed like the ideal way to tie a group of PC's together, and give them the motivation to go on adventures together. Faced with the choice of which system to use, I found myself more interested in the new RQG rules. I usually prefer more rules-lite systems or story games, but Runequest seemed to be experiencing a revival that was very exciting. I also liked the idea of setting the campaign later in the timeline, after the Lunar occupation.

My next big decision was choosing which region in the core book to focus on for my campaign. I felt like Sartar and Prax were the most detailed with prior published material, and Sartar was slightly more interesting to me. With a clan-based campaign, I also had to choose which tribe would be a good fit. The Dundealos immediately jumped out to me as being in a unique position in the setting's start date of 1625. They were one of the few tribes to be completely disbanded by the Empire, but they had returned to resettle their valley after the Dragonrise. This is detailed very briefly in the core book on p. 108, under the section on Swenstown. This would allow me to run a campaign focused on rebuilding, and reforging a lost connection with past traditions (not unlike King of Dragon Pass). The Dundealos also have some interesting neighbors, who could make good allies or antagonists depending on players' actions. These include the nomads and creatures of Prax, the impoverished Balkoth Tribe, and the slave-taking Sambari Tribe.

When I was writing notes on the setting, I found the fanzine Hearts in Glorantha very helpful. The first collection contains an article on the Dundealos Tribe by Jeff Richard, of which I used most of the clans for in my campaign. It also has an article on the Balkoth, which I made use of (and it's awesome, there's so much more to them than just goats!). The Sartar Companion was also very helpful in mapping out the Dundealos Valley.

I wanted to create a clan of my own for the campaign. The Bardori are typical of many Dundealos clans: they herd more sheep than cattle, they produce many fine riders, and they tend to fight in a skirmishing style with bows and javelins from horseback. They are also unusual in several ways: their clan wyter is a rooster, they consider all chickens (especially roosters) sacred, and they see Elmal and Redalda as equally important to Orlanth and Ernalda. They worship several heroes known for their skill in riding, including Hyalor, Ulanin, and Derik Pol-Joni.

The Bardori were disbanded in 1618 by the Lunar Empire, after the Dundealos rebelled, and were defeated. The survivors either went into exile, lived as bandits, or were enslaved and forced to work on the New Lunar Temple. The core rulebook for RQG states that the tribe was disbanded in 1615, while the HQ books say 1618. For my campaign I went with the later date, because I wanted there to be a faction of former slaves in the clan, and 10 years felt like too long for anyone to survive in a Lunar slave camp. The core book mentions a "Pol-Joni adventurer" being responsible for recreating the Dundealos tribe. I decided to flesh out this character more, and give him the name Ekil Blackmane (or just Blackmane). He led a band of warriors back to the valley, only a few days after the Dragonrise, and destroyed the remnants of the Lunar Enstalos tribe. He then became the new tribal king. What exactly happened to the Enstalos people, specifically the women and children, was left to the new clan chieftains. Most were enslaved or ransomed if possible. The new Bardori chieftain, Angarr Broad-Back, returned to the Dundealos Valley with his warriors at the same time as Blackmane to reclaim his people's land. The harvest was not yet complete, so he chose to go against clan tradition and keep the Enstalos survivors as thralls to finish the harvest.

All of the player characters were either children or teenagers when the clan was forcibly disbanded. When I had my players make characters, I had them think about how they fit into their clan's recent history. This was in addition to the normal family history generation, but they ended up being fairly compatible. They had the following background options to choose from-

Here is a segment of the Dragon Pass map by Darya Makarava. The river running from Boldhome into Prax (near the Dragonrise), and the surrounding valley, is the campaign's "home base." The river is called the Willow Beck, and the valley is named for the Dundealos Tribe. 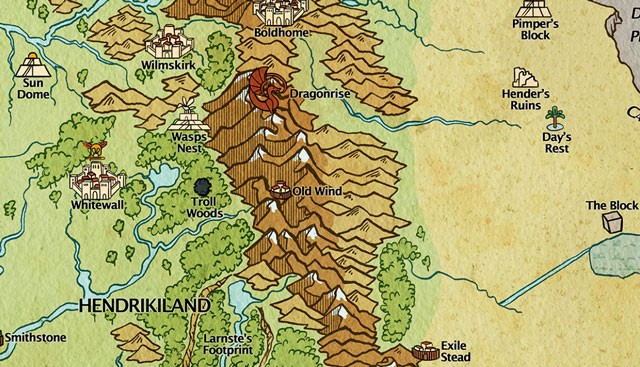 We started with three players, and ended up adding a fourth fairly recently.

Garkar - Former bandit, Initiate of Orlanth - Garkar lived as a bandit, and fought against the Empire after the clan was destroyed. The harsh life of banditry formed him into a vengeful, somewhat paranoid man with many grudges (most of his passions start with "Hate"). Garkar has few ambitions other than to see his clan back on their feet, and to punish their old enemies.

Erindros - Exile in Esrolia, Initiate of Issaries - Erindros is the scion of one of the two merchant families in the clan. His wealthy aunt in Nochet took him in as a child, and he was raised in the (relative) safety of great city. When the Empire was driven from Sartar, Erindros was encouraged to reclaim his family's land in Dundealos Valley, and he did so (somewhat unwillingly). He discovered his family's farm was in great disrepair, and set about rebuilding it. Erindros is effete and snobbish towards his "barbarian" cousins, but in spite of this he is a great leader in battle.

Egajia - Praxian, adopted into the clan by the chieftain, Initiate of Daka Fal - Egajia was born among the High Llama riders, her family were rebels who fought the Lunars alongside Angarr Broad-Back and the Pol-Joni. Her family were all killed, and Angarr adopted her into his own household. She returned to the valley to serve the chieftain as a thane, and lives a strange half-life, spending time with her new kinfolk, and visiting her shaman mentor in Prax.

He Who Spits at Chaos (formerly known as Brun) - Exile in Prax, Initiate of Storm Bull - Most of Brun's family were slaughtered by the Lunars after the last Dundealos uprising. He found a sense of belonging with a band of Storm Bull warriors based in Prax. After his initiation, he took his new "name." HWSAC only recently joined the campaign, and is determined to build a shrine to his god on Bardori land, which will also double as an inn and beer hall. His kin appreciate his talent at fighting Chaos, but see his future ambitions as... problematic.

More background material, and covering the campaign events up to the present. Thanks for reading!