Our last session was a short one, partly because HWSAD had to bow out for the evening. Still, we covered many exciting events, and the party finally arrived in Pavis.

There were still a few loose ends to tie up at the Paps, including worship rolls and a traditional celebration for Egajia. Erindros also decided to buy some copper to sell in Pavis. When all this was taken care of, Mok bade farewell to his protege, and wished the rest of the party well. The caravan then set off again for the dusty plains. The plan was to take a day for travelling around Eiritha's Sacred Hills, as no-one wanted to offend any devout Praxian khans just for the sake of taking a shortcut. The party then crossed the Long Dry over a period of roughly four days. Everyone loaded up the mules with extra water and rations, and because it was still Sea Season, the weather was only slightly blistering. Our heroes reached the Zola Fel River Valley after another day, and stopped to rest at a small farming village with an inn. The next day they reached the famous city of Pavis! 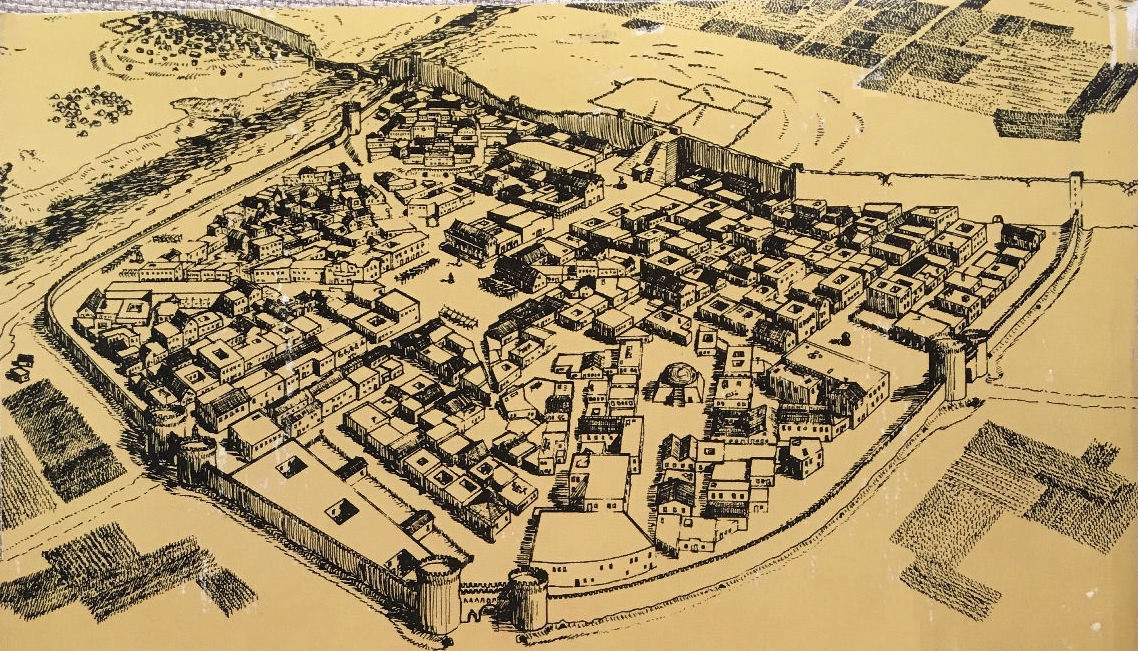 Given that information about New Pavis in 1625 is somewhat lacking, I had to add a few details of my own. I decided that the biggest visible difference is that the walls around the South Gate have been pulverized, and what was once the Farmer's Quarter has now effectively become the Nomad's Quarter. The tight streets and alleyways of the city have become even more cramped with Praxian herd beasts and nomad warriors strutting around as they please. Several large nomad camps also cluster along the southern side of the walls. This was the direction that the caravan entered, and thankfully no-one gave them any trouble. Argrath, the "King of Pavis," had occupied the Count's Palace for his court (I wasn't sure if it was there or the Temple of Pavis, but the former was more convenient, for reasons which will eventually be made clear).

He Who Spits at the Devil decided to stay at the temple of Storm Bull, and drink himself into a stupor for the next few days (this is how we explained his player's absence). Erindros set up his market stall in Founder's Market, and stored the caravan's goods near the temple of Issaries with the baboons to guard them. Garkar and Egajia were both present at the liberation of Pavis, and had spent some time there before their exile. They both recommended staying at Gimpy's for the good food, reasonable rates, and fine entertainment. Many of those already staying at the inn were warriors from Sartar, looking to join up with Argrath's army. They passed the night uneventfully in a shared room. The next morning in the common room, Garkar saw a familiar face. In his days as a bandit in Sartar, he had often crossed paths with Orstalor Spearlord, one of the most prominent rebels during the occupation. Orstalor and his band, Miki's Mudhens (mentioned in the Coming Storm) raided the empire in the northern parts of the kingdom, and Garkar aided them on several occasions. The former rebel had now joined Argrath's band of heroes and was helping to organize his army.

Just as a note, I wasn't sure if this particular NPC had even joined up with Argrath yet. Looking back on it, it almost seems more likely that this would have happened after the Battle of Sword Hill, but out of all the Sartarites connected to Argrath, Orstalor seemed to be the most likely person that any of the PC's would have met previously.

Orstalor told everyone that word had gotten back to the King that a caravan from the Dundealos Tribe had come to the city. As a representative pf Argrath, he hoped to offer gifts to the king of their tribe, and asked Erindros if he would be willing to see these gifts safely back to Fort Jaldonkill. He offered goods, silver, and a herd of 50 cows, 20 horses, and for the bird-loving Bardori clan specifically, 10 rare riding ostriches! Erindros was trained in ostrich riding, but so far had failed to find a proper steed in any Sartar market. Thus he was thrilled by this offer. Still, he and the others were somewhat suspicious at Argrath's generosity, and questioned Orstalor as to why he sought the favor of the tribe. Orstalor said only that the King was looking to build alliances and encourage more trade with Sartar, and that he had sent gifts to many tribes already. When asked about the many warriors, nomads, and adventurers gathering in Pavis, Orstalor said that the city couldn't support them for long, and that he would be "back in his old stomping grounds soon enough." Everyone found this a bit disturbing.

Before he left, Orstalor also shared a rumor that he thought the party would find interesting. During the city's occupation, the Lunars had supposedly gotten their hands on a suit of iron armor that belonged to none other than Derik Pol-Joni, the Dundealos Tribe's greatest hero. After Pavis was liberated however, the armor went missing from the vaults at the Count's Palace. Not long after that, a group of dwarfs from the city's Flintnail cult presented Argrath with another, entirely different suit of armor as a gift. Orstalor pointed out that dwarfs rarely give gifts to anyone, and when they do it is often more than simple generosity. He suggested they speak with the leader of the dwarfs, Ginkizzie, at Dwarftown, about the missing armor. Finding it and presenting it to the Dundealos tribal ring would be even more impressive than showing up with lots of cows.

For the rest of that day, Erindros sold many of the goods he had purchased in Sartar and Prax at a decent profit. Egajia went among the Pol-Joni camp outside the city, and offered her shaman skills to help fight off disease spirits infecting the camp. Later everyone went to Dwarftown to speak with Ginkizzie. Speaking with any of the local dwarfs proved difficult, as they were all very caught up in their routines. Speaking with head dwarf seemed impossible, until Erindros mentioned that someone from Argrath's band had sent them. After that, Ginkizzie appeared at the front office within minutes. None of the PC's (or the players) knew about Ginkizzie's unusual heritage, but it was clear that he looked a bit different from the other dwarfs. His features were more human-like and symmetrical, and he also had a pale, greenish cast to his skin. Otherwise he dressed like a gold dwarf, ostentatiously. When asked about Pol-Joni's armor, the head dwarf only said that whoever had stolen it from the Lunars' vaults was likely hiding in the Big Rubble, and that they should search for it there. Garkar noticed that their presence and questions were making him uncomfortable, and he pressed the dwarf for more information. Ginkizzie relented, and invited everyone into a private office.

He explained that the disappearance of Pol-Joni's armor was because of a local dwarf. Argrath knew this somehow, and so Ginkizzie had offered him a different suit of enchanted armor to placate him. Meanwhile, he and the other members of the Flintnail cult had been searching for the rogue dwarf who stole the original armor. His name was Vorlokk, an iron dwarf and expert blacksmith. Ginkizzie explained that Vorlokk had been acting strangely over the last few seasons. Some dwarfs fall prey to a strange illness, in which they become obsessed with recovering items that they have made and lost (or given away). Vorlokk was the original creator of Pol-Joni's armor, and gave it to him when they met at Dwarf Knoll in Prax, centuries ago. Vorlokk disappeared from Dwarftown not long after Pavis was liberated. Since then, the humans in Manside, and the Loricek troll clan have also been robbed of artifacts that Vorlokk had originally made. Ginkizzie is certain these events are connected to Vorlokk, and now considers him to be an apostate from the Pavis community of dwarfs for his reckless actions. He asked the party if they would be willing to lend their efforts in bringing Vorlokk to justice. In return, they would be allowed to claim the armor for their tribe, but would have to swear that the dwarfs could reclaim the other stolen goods and any dwarf secrets. He also asked that they keep the entire matter a secret from other interested parties. The PC's agreed, and so Ginkizzie introduced them to one of the renowned Rubble Trackers, another iron dwarf named Chain Song. He would assist them in following leads in the Big Rubble. We ended the session with the party debating the best place to start looking in the Big Rubble for Vorlokk and the stolen armor: the human community in Manside, or the trolls of the Loricek clan.

That's all, thank you for reading this rather exposition-heavy recap! Until next time!