So you and the Players are moving fast. They're on their way to investigate some ruin, or explore some place, and on the road they meet ... someone. Something. Only, the moment you announce the encounter, the Players decide to sidestep the whole thing or to hide until it passes.

How do you involve the Adventurers in the encounter without shoehorning them in or railroading them?

Bring in elements, such as hooks and shoves, which draw them in or shove them in the direction you want them to go.

Roping In The Adventurers

The point of presenting an event on the road is to give the Adventurers something to do on the way to, or sometimes from, an adventure. Random encounters which simply present a bunch of monsters for the Adventurers to fight is simply not good enough. Modern gaming requires that encounters should have a point, which is of relevance to the adventure, or to the Adventurers.

Note: This article is not about creating tables describing who or what the Adventurers encounter, whether it be a pack of 1d4 kobolds or a bunch of bandits. This is about why the Adventurers should get involved with these beings.

A hook is something which draws in the Adventurers and involves them in the action. The point of a hook is to engage the Adventurers and give them some sort of reward for participating in the scene - which could be an allegory for the Adventurers' real adventure, or foreshadowing, or simply a chance for them to restock on supplies and find out some kind of relevant information.

Roll separately on each column on the following table, or choose.

The key to any hook or shove is motivation. Something is behind the encounter, which either draws the Adventurers in to become involved, or which drives them to seek a different direction, approach, or even a whole different adventure.

Roll on the table below, or just choose.

Example: The Adventurers encounter a minor character in the current adventure. They are trading with a third party. The motivation table indicates secrets. Whose secrets are being traded? Canny Adventurers would want to know, particularly if the third party was a Rival of theirs who might use the information traded to beat them to the punch.

Example: The Adventurers encounter an Ally, perhaps one they haven't seen for several adventures. The roll indicates that they are trying to rescue a stuck comrade. The Adventurers pitch in to help - but the comrade is one of their Enemies! Worse, the Enemy has vital information about the place they are travelling to! 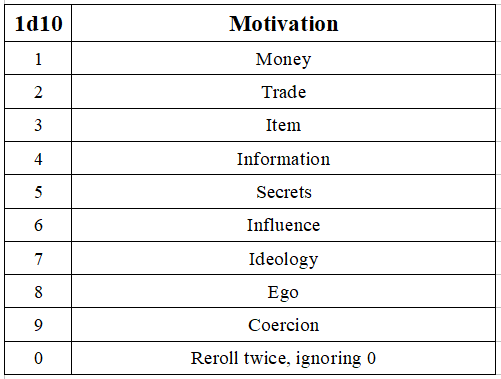 The Twist Table is used to determine whether or not a particular encounter is as it seems. Games Master, only use this table if you want things to be truly random, or if you can't make up your mind whether or not to throw in the unexpected into what might seem to be an ordinary encounter.

Note that this is the only time that an encounter could lead to a combat scene.

Note how different dice rolled can alter the probability of a given outcome. It is so much harder for something unexpected to occur if you roll on a 1d100, for instance, than on a d4. So choose the die you want to roll, and roll it, and see what result occurs on the Twist Table below.

Or just choose the result.

The Adventurers are engrossed in some activity, perhaps helping out, when something happens to disrupt the scene and change it completely. Examples: A volcano erupts, threatening to spill a vast pyroclastic cloud upon everyone's heads; an earthquake shakes the ground; the bad weather worsens, and hailstones the size of peaches begin to fall; or a rock falls from the sky and impacts a short distance from the encounter, knocking everybody off their feet from the force of the impact.

Even just something as simple as the weather turning is enough to send the adventure spinning off in a completely different direction, as they might be forced to take shelter with a sworn Enemy against a harsh blizzard which would kill them if they tried to venture through it.

Nothing is as it seems

The Adventurers discover something which turns the encounter on its head. Perhaps they are helping refugees who turn out to be from an enemy nation or worshipping an evil deity. Perhaps they are not refugees at all, but something else. Or maybe it is a trap, and armed bandits are lying in wait nearby, hoping someone would take the bait.

Everything is as it seems

No surprises. This turns out to be a "what you see is what you get" scene.

Always keep referring to tables like these for variety. No two encounters should ever be exactly the same. even if the encounter table indicated "1d4 priests" or "2d6 soldiers" each time. With experience, you could start creating your own, designed for different environments, different settings, and even different circumstances in the same places.

Keep them varied. Keep them memorable. Keep the Players guessing.