The biggest feature of this book is the A2-scaled map of The Island. The PDF comes with layers, so you can turn different aspects of the map on or off. The second part is a list of statistics for the non-player characters who feature in Monster Island. And the third section covers the Encounter Tables from the main sourcebook.

It's a handy book to have for the map, the encounter charts and of course the Non Player Character stats. All the essentials you need to refer to during play, really.

A Bird In The Hand

A Bird In The Hand (ABITH) is an adventure set on The Island. There is a bonus for players and Gamesmasters towards the end of the book, but we'll come to that in a minute.

The premise of the story is simple. The plot revolves around an unusually smart bird.

The Adventure begins with the Adventurers being hired to alleviate a merchant of the burden of ownership of a particularly unusual bird. This is a heist story, basically - they have to boost this bird somehow, using misdirection, deceit, breaking & entering, every skill but swordplay, really.

There is a cast of Non Player Characters, who will interact with the Playsrs in various ways - from friendship to hostility. There is some digging around, and nobody's ever seen or heard of a bird with the abilities this creature has.

The adventure addresses the heist itself. What results turn up if the Adventurers are canny enough to actually ask questions / do the research / conduct surveillance, and so on. A map of the heist venue and surrounding businesses. Local Non Player Characters, and so on.

There are stats on page 11 for shops and shopkeepers, followed by lists of stats for various kinds of body armour, and some shopkeepers. There is a section outlining the patterns and routines of the mark, including a cameo by The Chuckle Brothers as night soil collectors ... if you're British, you'll get the reference ... 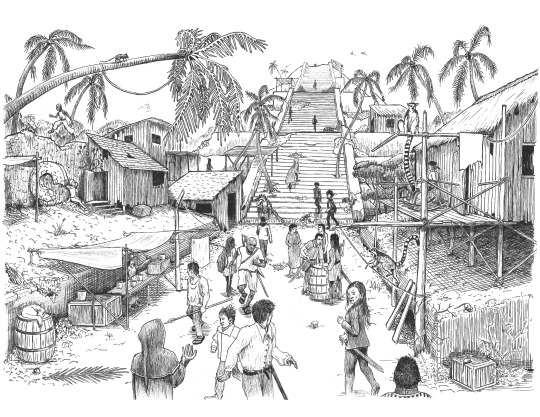 Some of the hazards include drawing down the attention of the guards, nosy neighbours, bad weather, and the local equivalent of organised crime.

There's a box text on page 15, listing various things people are doing in the town, ranging from offering tarot readings to selling their bodies, or begging. Real slice of life stuff.

And then they get the bird, and everything gets turned over.

Okay, spoilers here - the bird is really smart, and it tries to get the Adventurers to take it out into the jungle.

Assuming they do, they trek through the jungle to a village called An Dai Ai, where a remarkable transformation ensues.

This story shifts from being a heist to being an expedition. They must travel to the Oodaki village, possibly being pursued by one or more miscreants from the previous heist story. When they get there, the secret of this smart bird becomes clear.

It has been the living host for a Kahuna, Mele, who had been hiding his soul in the bird in order to keep it from being eaten by an entity, Iz.

It turns out that

Iz crept into this world through a Smoking Mirror, and it is now spreading its evil tendrils throughout the jungle surrounding a coastal ruin.

The Adventurers are roped into bringing down a corrupting entity.

This leads to part 3, Ruin By The Falls, which takes place at the end of Gushing Crack.

Legal team, I did not name this geographic feature. Do not ride me. Thank you.

The Adventurers have to help the locals to penetrate the ruins, and to fight off Iz's minions and guards, until it can be bound into a crystal geode forever.

On this quest, the Adventurers must contend with the dreams of the corrupting being known as Iz, which afflict their sanity - effects which grow worse, the lower they go, until they are faced with a direct confrontation with Iz itself.

This whole section feels like a somewhat standard dungeon crawl, to be honest. An inverted Wizard's Tower where, instead of going up, the characters playing Bruce Lee travel down through the levels to play the Game of Death, and yes I just went there.

At each turn, they face twisted and corrupted forms of beings, ranging from insects to the warped body of the person who sent them off on their first quest, a bird collector called Coynrad who ends up a physical birdman himself. There's an opportunity to gather treasures, including items which can be of use in the final level ... and then they face Iz on the next level.

So confronting Iz is the boss level fight scene of the whole adventure. The Adventurers must confront Iz morally and philosophically as much as physically.

I've got some bad news for anyone who hates the Social Conflict rules on page 14 of Mythras Companion ... this part of the adventure requires use of those rules. Don't shoot the messenger.

A mighty boss level fight ensues. What happens is ultimately up to the Players, but regardless of whether or not they succeed in helping the Kahuna Mele to bind Iz, the Ruins begin to fall into the sea, forcing the Adventurers to have to flee back up towards the surface.

Anyhoo, the adventure is then pretty much over at that point. They will have carved a new legend onto the cliff faces of The Island, they will have made lifelong friends and enemies, they will be the talk of the town, and the story might even keep them in hot dinners and a soft bed for a few weeks.

The next few pages offer stats for the major Non-Player Characters of this adventure, from Coynrad Lorrnz - the Patron who gets them involved - and Fat Boyd, the first chapter's Big Bad, through to Iz and the Guardian Spirit at the end.

Personal note ... I don't like the term used for Fat Boyd's retinue of muscle, "Guys and Gals." That used to be one of the catchphrases used by that loathesome reptile Jimmy Savile in real life.

Inspector Ludstrud is a combination of Inspectors Lestrade and Japp, and Lieutenant Columbo with his "One more thing ...". 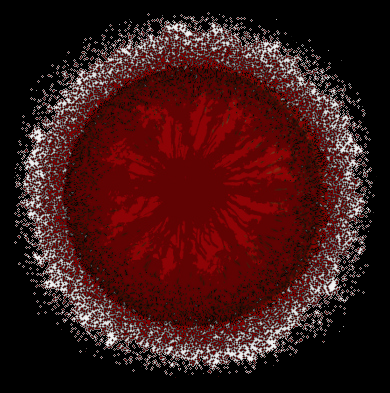 Lastly, the adventure lists stats for the monster corrupted bugs which are encountered first, and the Guardian Serpent which is native to this ruin, but has been dominated by Iz. If it can be released from Iz' dominance, it can become a powerful ally in the fight against the extraplanar spirit.

The last bit in this book is a section devoted to hexcrawl rules. Players and Gamesmasters can make use of these rules to go exploring the face of The Island, and enjoy the various encounters along the way. Here is where the encounter tables from Monster Island or from the Companion can come into their own.

Everything is considered here. Fatigue, supplies, even good and bad luck and the minor annoyances or blessings which might happen along the way.

Finally, the book ends with a map of Monster Island. One last, loving look at this land which has been the backdrop for so much adventure.

This is the last blog post to visit Monster Island, at least unless someone produces another adventure for the place. The Island is one of the richest fantasy island settings on the market, only rivalled by Harnworld.

All you really need is Mythras, Monster Island, the Companion and the hexcrawl rules from ABITH, and you can be running Mythras adventures just on this island for years. It is true to say that you can never run out of adventures on Monster Island.

Thanks for following this long series focusing on Monster Island. Next week it's the turn of Perceforest, and after that I think I'll start looking at the few Mythic Earth books which I currently own.