So, where were we?

Ah, yes, here we go. We were exploring the first 100 or so pages of Weird of Hali. So far, the game has felt pretty much like any other Mythos game, with one exception - the player characters are on the other side, working with the Great Old Ones and possibly calling some of them family, displaying odd traits which become more pronounced as the alien side of the family gradually wins out over the human blood.

And let me point out that, in Weird of Hali, this is a good thing. 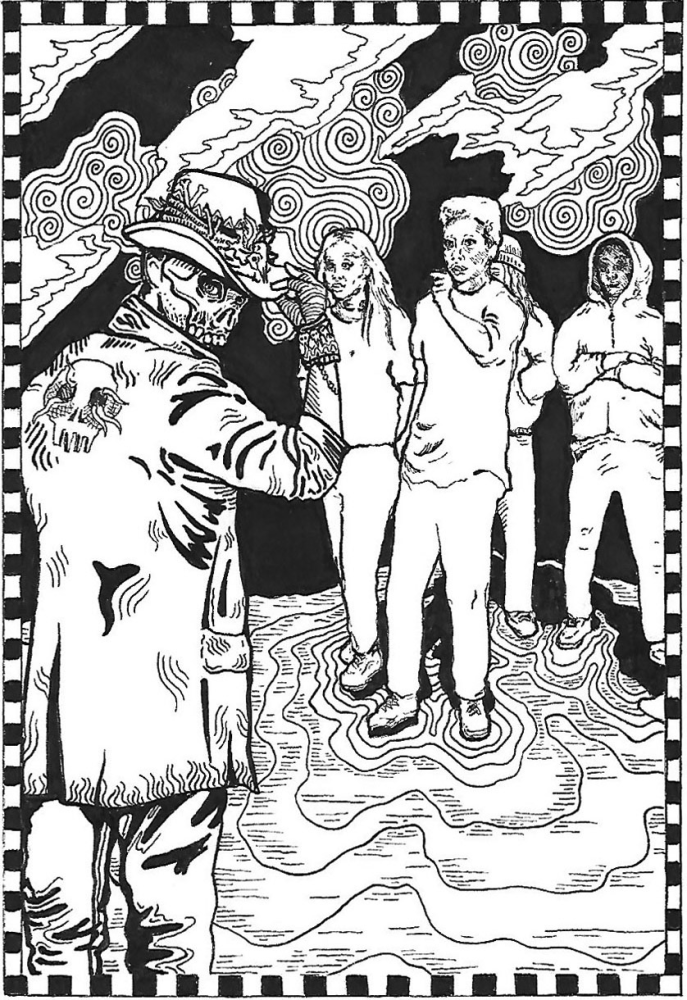 We had just come to the end of the magic chapter, but I feel obliged to bring you back up to speed here.

Sorcery is a way of manipulating the universal life force, known as voor, to produce mostly mental and perceptual effects, with some physical effects. Characters spend Voorish points rather than Magic Points to cast spells.

And there are three main branches of magic, which every character can eventually access (nobody knows any magic at the start) - Witchcraft (Folk Magic), Initiation (Mysticism), and Conjuration (summoning / binding / commanding / banishing Mythos entities). Characters may learn from Mythos tomes, Greater and Lesser, and buy do those tomes shake their Sanity - and this is also a good thing, because this game is about discovering that the rational, mundane world is just a veneer over something far deeper, richer, and more rewarding than you can imagine. 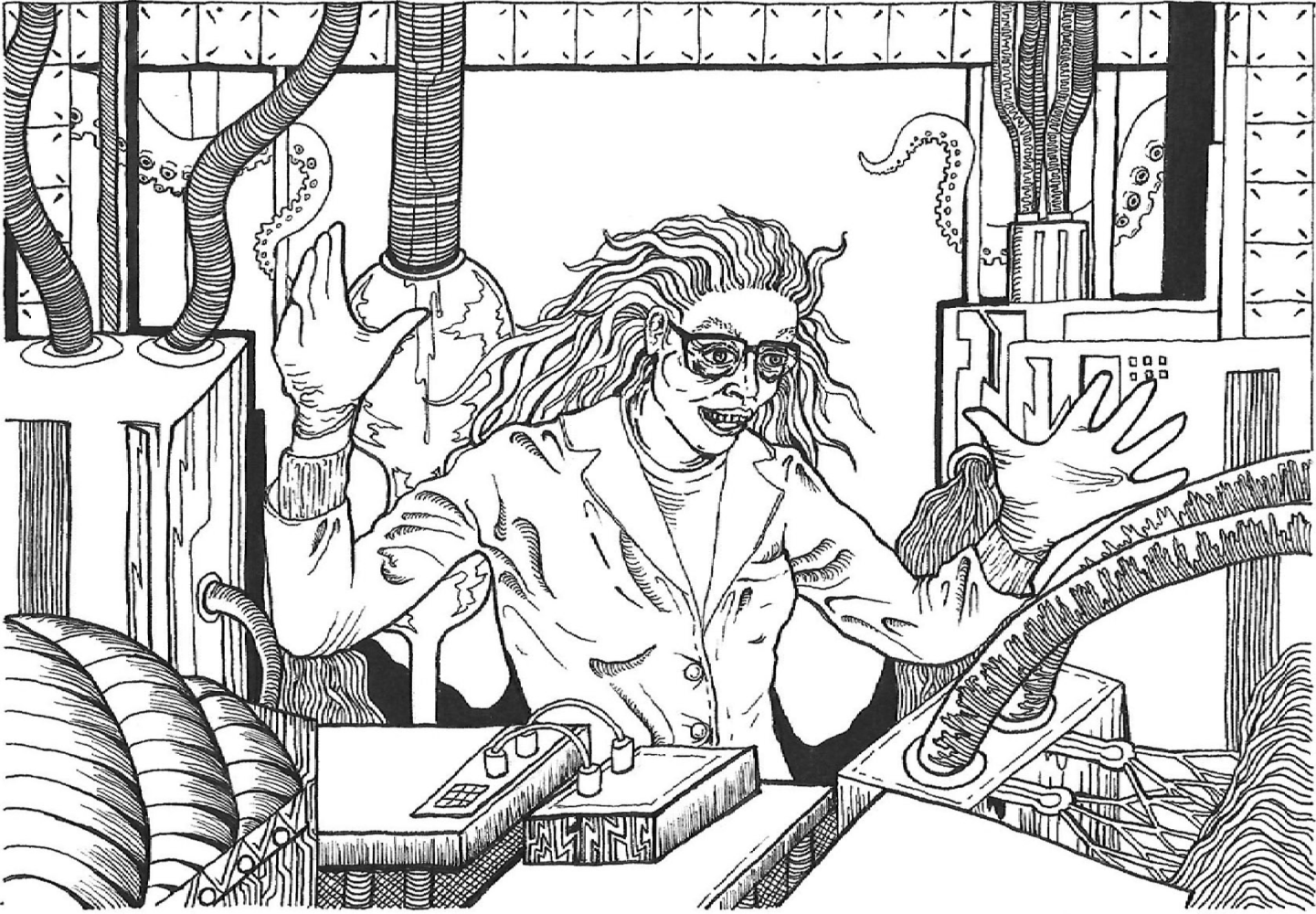 Gamesmasters of Odd Soot - this chapter is perfect for that game from Frostbyte Books. I kid you not. The chapter presents a series of tables, which effectively describe the scientist's chosen field of study, along with the blasphemous and obscene tools and methods by which they pursue their field of study. Think of Dee, Gabriel Shelley, and Professor Lang in Bryan Talbot's Heart of Empire (aka Luther Arkwright Book 2). Dee dabbled is Kabbalah, alchemy, and haruspicy (divination by entrails); Gabriel Shelley experimented with hallucinogenic fungi; and Lang built a nuke to use in a fireworks display in the middle of one of the Londons.

Now back from the worlds of Luther Arkwright and Odd Soot to Weird of Hali. The rest of this chapter lists, along other things, random sorcerous objects, secret devices, forbidden devices, consumables (I am tired of the use of the term "potions" to describe anything liquid which your Adventurers drink; call them what they are - poisons and/or drugs) and dangerous named occult artefacts, namedropping characters like Herbert West. The "reanimation serum" is basically the glowy green serum from the movie Herbert West: Reanimator featuring Jeffrey Combs in his breakout role before he went on to play every single alien in Star Trek. The Tillinghast Resonator is a shocking device used by the Radiance bad guys, which basically hits the targets like a sort of weaponised LSD field - it creates an EM field which triggers what look like hallucinations, but which are in fact glimpses beyond the veneer of mundanity into the real world beyond.

This chapter is an exciting, often terrifying, read. All the things listed could be just dropped into the game to be either discovered by, invented by, coveted by, or used to destroy, the Adventurers. Not one part of this chapter is dull. Your inner fiend may well cackle like a Bond villain, if it is anything like mine.

What follows next are the bread and butter of Mythos games. All the creatures.

The chapter starts with the Great Old Ones - the heavy hitters like Nyarlathotep, Azathoth, Cthulhu, Yog-Sothoth, and Shub-Ne'Hurrath, and the lesser (yet still potent) beings such as Nodens, Yig, and Phauz / Bastet. If you've run Mythos-based games from Sandy Petersen's iconic Call of Cthulhu, you'll be closely familiar with these Great Old Ones, and greet them here like old friends. To many of the Characters in this game, they probably are - and to some, they could even be referred to as family.

There then follow the Elder Races, starting with the Deep Ones. The chapter moves on to describe flying polyps, ghouls, Mi-Go, night-gaunts, serpentfolk (my favourite species), shoggoths, and voormis. The book has left out some Mythos creatures such as Brian Lumley's Chthonians and Ramsey Campbell's Y'Golonac, and the Elder Things themselves are not statted up here since they have long been rendered extinct by the time of Weird of Hali, along with the Great Race of Yith which sent their minds forwards in time hundreds of millions of years to avoid the flying polyps.

The chapter moves on to Eldritch Beings - Behinders, Nyarlathotep's Black Dogs, Coloured Gases, Culverins, Dark Young, Flats, Floating Globes, Formless Spawn, Generic Tentacle Monsters to trot out when running a Mad Scientist's Laboratory scenario, and no, stop that, you're not bringing the H word in here.

Those who know tentacle monsters respond instead to the probing tentacle by patting it, talking to the monster in a soothing voice, and perhaps giving it something to eat, upon which it will usually crawl back into its lair.

Gnophkehs, check. Hounds of TIndalos, check. Krakens, check. Kyrrmis ... am I pronouncing the name right because I sound like Miss Piggy calling for her green batrachian ex-husband ... moving on, Lake Monsters and Sea Serpents - cool, I am so stealing these for Fioracitta ... Mammoths ... okay, who reanimated these hairy buggers? ... Dancers With The Stars, no sorry, misread that, Shamblers From The Stars ... er, Shantaks, Skims ... oh, that's what happened to the Yith ... Giant Spiders, Tollers, Xin, and the mysterious Yag-Kothaun.

Next, a bunch of ordinary animals, such as alligators, bears, boars, big cats, domestic cats, dogs, swarming critters, and dogs.

This is followed by the worst, most dangerous, most rapacious and hostile life forms ever to be encountered within the setting.

The most common sentient species on the lesser Earth at present, humans are not as intelligent or as magically talented as most other races, but make up for those limitations with the brashness and energy of a young species. Curious, clever, and prone to sudden violence, they baffle most of the elder races, though serpent folk find their simple-mindedness oddly endearing, Deep Ones think of them as children badly in need of instruction, and the smaller breeds of shoggoths (who are only about as intelligent as humans) get on with them surprisingly well.

This is probably the most important section of the creatures chapter, because of all the monsters your characters are likely to encounter, these are by far the commonest, most numerous, and most hostile of all of them.

Initiates, Fellowship of The Yellow Sign, Mad Scientists, Offspring of Great Old Ones, Poseidonian Families, Revenants, Shonokins, Tcho-Tchos, Turanians, Witches, and Yithian Hosts round off the section on humans and, indeed, the entire Creatures chapter.

There then follows the section devoted to the Big Bad - The Radiance, basically supremacists, bent on imposing their fascistic view of reality on the human race, and exterminating deviancy. Think of the Puritans, and White Wolf's Order of Reason and Technocratic Union. You get the gist. The Radiance are Delta Green and Charles Stross' The Laundry Files, with perhaps a callout to the human protagonists of The Esoterrorists, misguided into thinking that the Player Characters are the bad guys from that game.

Negation Teams are ... well, I called it. Delta Green. These chumps are Delta Green. They are cops. They are the bad guys. Hells, if you're braiding in Luther Arkwright, these are Disruptors, and if you eventually find yourselves running Department M, the Radiance will have swallowed up that Agency - and their Agents and Operatives would be working against your Characters. 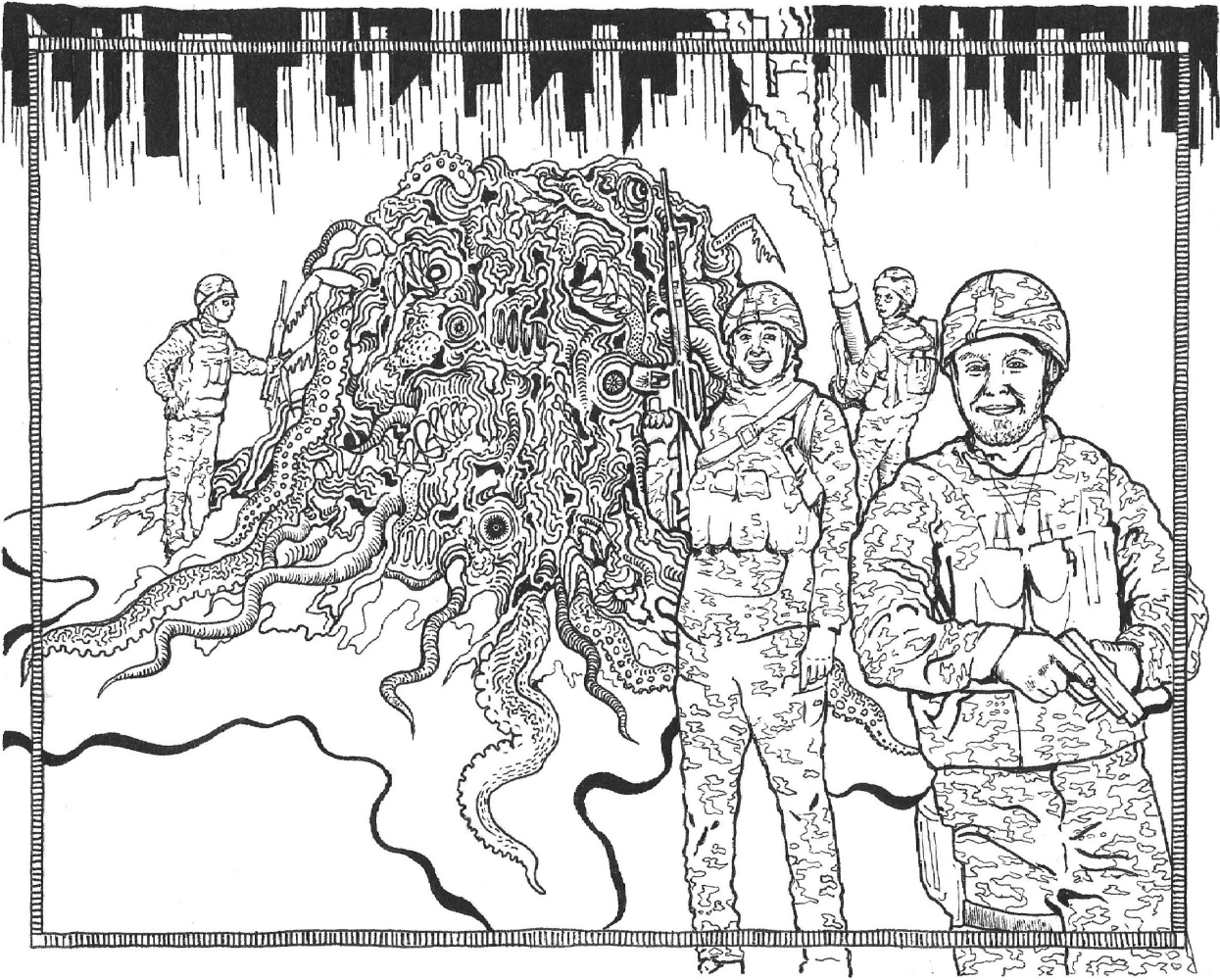 Remember - the baddies in the above pic are the yotzes in fatigues. The dead Thing in the middle could well have been your Dad.

So now we're coming to the end of the book. The next section is for Gamesmasters, and it's about how to run Weird of Hali. I recommend you track down John Michael Greer's books and just devour them. Well, not literally, mind you. Just steep yourself in their lore. Then, for contrast, track down Charlie Stross' Laundry FIles, all twelve books, to get a read on The Radiance. Know Thy Enemy. These are UNIT and Torchwood as baddies.

This part of Weird of Hali covers how to run entities, combat, magic, the Radiance, and narrative hooks in your game. Investigations get given the Mythras treatment - clues, infodumping, the role of criticals and fumbles, and so on.

Next is where everything gets thrown into the mixer. Weird of Hali can be combined with Mythras core, and in particular with Luther Arkwright. This particular game is called out here, because what we all want to see is Bryan Talbot working with John Michael Greer to produce something awesome.

And you, as Gamesmaster, get to run the crossover.

Might I also recommend a possible crossover between Weird of Hali ... and Odd Soot?

What's next? Page 159, The Tablet of Sarkomand, a mini adventure for Weird of Hali which runs to page 176. No spoilers. Have fun playing this adventure.

That brings the book to an end. The next page is the Index, and one final blank page in the PDF. And that's it.

My last thoughts, as I put away Weird of Hali, are that this book is really enjoyable. It's a look at the Mythos, from the point of view of the entities and those who dwell within the murky shadow world beneath the veneer of mundanity. Your characters can be diverse, intelligent, compassionate, strange, and humane. In contrast, the Radiance is everything that is wrong with humanity. They may be fighting the entities and targeting the Characters - but trust me, these fascist putzes should not be considered to be the good guys by any stretch.

The world of Weird of Hali is highly recommended. It can be genteel, beautiful, intense, intimate, warming, or harrowing - often all in one session, rather like British weather. It's a game which allows you to explore what it means to be people, and to stretch your definition of whom you include under the word "family" and the pronoun "we."