A personal note before I begin this week's post.

Last week's hiatus could not have been more timely. I ended up going through a week from hell. I am not entirely convinced it isn't going to turn out to be a fortnight from Hell, but at least the crises I faced this last week have been resolved.

Can't speak for tomorrow's crises, but then again tomorrow doesn't exist yet.

There are many types of ruins, but they all have the same ending: places which are no longer being used, for whatever reason.

A ruin might have been abandoned due to economic reasons, or due to the death of the person who kept the community together. A place can be brought to ruin by enemy conquest, or by natural disaster. However it happened, a ruin is a place where dreams died, and the past can only serve as a warning to the present.

Here are some ideas as to what sort of ruin the Adventurers can find themselves in. Roll on 1d20 or choose. 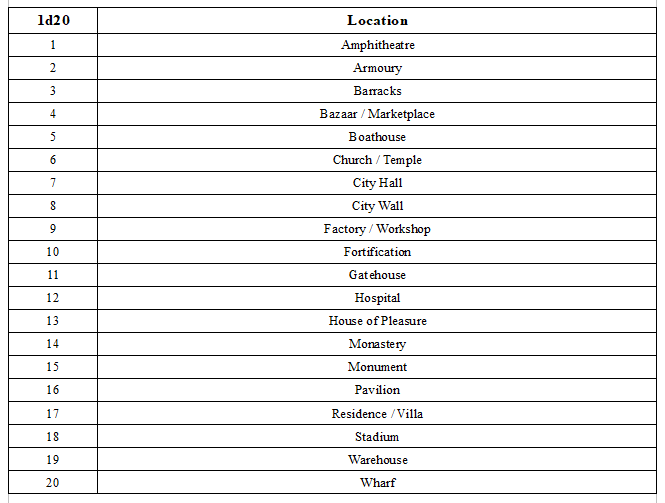 Some ruins have a claim to fame; a place in the history books. Think of the ruins of Troy and Pompeii, of Sutton Hoo and Derinkuyu. Imagine the Great Library of Alexandria at its height and its nickname, "The Place of The Cure of The Soul." Imagine the now-vanished workshop od Tapputi, the world's first recorded scientist, chemist, perfumer, and the inventor of the distillery. Or your world's oldest amphitheatre, where the most famous historical playwright of your fantasy world once trod the sand and delivered her impassioned monologues, and entertained the crowds with philosophically-charged plays and parables?

An abandoned hospital, thousands of years old, on the site of your world's first university, will be charged with a different kind of energy than the wreckage of a deserted psychiatric hospital abandoned due to an outbreak of plague ten years ago. How / Why Did The Ruin Form?

Most ruins form from either economically-motivated abandonment, warfare, a natural disaster, disease, famine, conquest, invasion, ideological imposition, or the cessation of some form of resource on which the ruins depended.

Economically-motivated abandonment: That's simply money. People stopped coming to the place, perhaps because the location was no longer central to the city and a new place had opened up in the centre of a new, expanded community. Consider a temple sited on a hill. The supporting city builds a new temple in the centre, and people stop coming to the old temple, eventually trigge3ring its abandonment as the priesthood move to the new temple.

Warfare: The city of Troy was thought of as a Greek myth, until it was discovered (and then blown to smithereens by explosives. Go figure). Also, the capital of Ancient Corinth deserves a mention here. Corinth is the place where the Corinthians lived, accorsing to the Biblical Letters of Saint Paul. They were also mentioned in the Acts of The Apostles in the same bible. You can thank the Romans for destroying the place, and the sea for claiming the rest of it.

Natural disaster: Consider Pompeii, smothered for more than a millennium by Vesuvius. Your ruins could be buried in several hundred feet of volcanic ashes, washed away by a tsunami, or even (in your fantasy world) partly obliterated by a falling rock. A very small falling rock, which made a big mess, like Chelyabinsk in 2013.

Disease: A horrific way to go, diseases such as the plague, smallpox and so on can ravage entire regions of the countrydside. In the Harnworld setting, The Red Death (smallpox) claimed millions across Northwestern Lythia, including the island of Harn. The nation of Thonia (which has its own geographic module, published by Kelestia Publications) was all but rendered a barren wasteland. Thonia's thriving, yet isolated, civilisations were all but eradicated by the Red Death.

Famine: Famine can also lay waste entire regions. Famine can be caused by a number of factors: war, disease, drought, natural disaster - but also stupidity. Cultivation requires effort, planning, and resources: a crop which fails can turn a paradise island into a Summerisle.

Conquest / Invasion:  Going back to the ancient city of Troy, and to Alexandria. In both cases, imagine what they would have looked like today, if they had not been scrubbed down to the foundations by some ugly brute invaders. The same goes for ideological imposition: look at all those Abbeys and Monasteries which were ordered shut down by Henry VIII.

Cessation: Not exactly famine, as such, or even economic abandonment. Sometimes, a natural resource which drew people to a civic centre just dries up. Water from a natural spring (perhaps blessed by the Gods), or a herb which becomes extinct, or even some technology on which the rest of the region depends, but which becomes obsolete with the advent of a new technology (such as iron in the Bronze Age, or the mouldboard plough, or irrigation).

Why Explore These Ruins?

What would bring the Adventurers to an abandoned site? As Gamesmaster, you could think of a few reasons, but here are half a dozen ideas to set you off.

Rescue: Someone has gone wandering away from the community, off into the wilderness, and they've become stuck somehow amid the ruins on the hill. Perhaps they fell through a sinkhole to an undiscovered complex beneath; or perhaps they might have fallen foul of some bandits who have taken refuge there. Either way, time is of the essence before the missing person is killed or dies of exposure.

Reclamation: The ruins have now been bought up by a landowner, who wishes to develop the property. The Adventurers can be tasked with going there to clear out the monsters which have taken residence there, and which occasionally have been making forays into the town during times of famine. They could also venture there in order to find out some reason why they should not build there - perhaps it is credibly haunted, or there is still a trace of lingering plague there, and so on.

Shelter: - The Adventurers are passing by, when a storm hits, or snow, or they spot an oncoming invasion, and the ruins provide shelter and concealment.

Exploration: - There are rumours of a lost treasure of some kind hidden in the ruins. Don't knock this one: you never know when your clumsy excavations in the floor of an ancient Abbey may reveal a hidden copy of The Qur'an from the 13th Century.

Diplomacy: - Circumstances might require a neutral meeting point for meetings intended to bring a war to an end, or to conduct some state of affairs between cultures or nations. What better place than a ruin which nobody can lay claim to, or even a ruin which has cultural significance to both parties (e.g. a ruined Abbey where a treaty had been signed between two warring nations six hundred years before, the first time both nations had gone to war with one another). 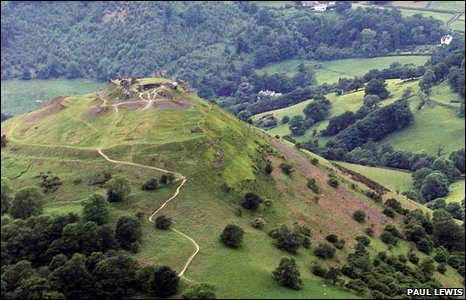 In the end, a ruin can be more than just a place to store random monsters to chop into little pieces. If you think that the abandoned places of the world can be more interesting to explore without bands of wandering monsters, feel free to use the above guidelines to work out some adventures to throw at your Adventurers. Who knows; they could uncover a Derinkuyu in some unexplored part of the world, and build up a population in the tens of thousands livin underground, with themselves as the leaders of an entire community and the complex as their base of operations - or they could content themselves with building an underground home, and building a regional power base with trade coming to them.

Just watch out for those ancient ghosts ...