Following from the last blog post, which looked at the newest Mythras setting, Destined, we're going to take a look at another Mythras setting, Luther Arkwright: Roleplaying Across The Parallels.

Luther Arkwright is The Design Mechanism's foray into a genre known as Steampunk. This genre of science fiction is characterised by strange, baroque steam-driven inventons, vehicles, devices and weapons. The Difference Engine by Wiliam Gibson and Bruce Sterling more or less made Steampunk mainstream, but the UK broached the genre first with the Bryan Talbot graphic novels The Adventures of Luther Arkwright and Heart of Empire.

Bryan was very much influenced by the writer Michael Moorcock and his creation, Jerry Cornelius. Moorcock was writing in the 1970s and Cornelius, an urban antihero, reflects the fashions and rebellions of that decade. Bryan developed Arkwright in the early 1980s, but the Cornelius influence is more than evident, as is the concept of the multiverse, which is a common theme throughout all Moorcock’s work.

Moorcock's Jerry Cornelius was one incarnation of The Eternal Champion - a mortal being who exists in some form in every universe within a vast multiverse of parallels. This may have been inspired by Joseph Campbell's non-fiction philosophical work The Hero With A Thousand Faces, which may itself have roots in older heroes such as Beowulf and

Anyway, there you go. Bryan Talbot's eponymous Luther Arkwright was his answer to that other guy. The multiverse of Bryan Talbot is similar to that of Moorcock, but unlike Moorcock's setting which had a different Eternal Champion in each parallel, there was only one Luther Arkwright, unique across every parallel. Luther was gifted with the ability to plane shift on his own, trvelling from parallel to parallel as easily as ordinary people would wander into an adjacent room.

In the graphic novels, there is a cosmic conflict going on, as an alien force known as The Disruptors destabilise individual parallels as part of a long-running master plan. The Big Picture is described in the Luther Arkwright sourcebook. This sourcebook also describes the protagonist force set up to combat these Disruptors, Project VALHALLA and the parallel known as Zero-Zero.

This is where Luther Arkwright: Roleplaying Across The Universe comes in, because the player characters are Agents of Project VALHALLA, taking orders from the AI W.O.T.A.N. and travelling between parallels in a steampunk dimension ship to thwart the Disruptors wherever they turn up. 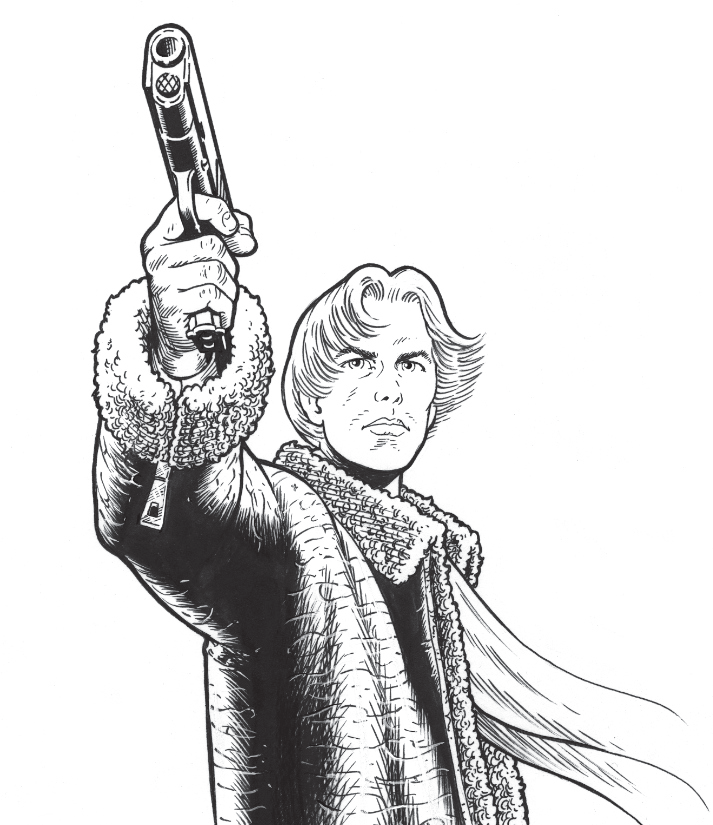 Player characters are VALHALLA Agents, wanderers between parallels. If you've never encountered this kind of setting before, think of it as like the TV series Sliders.

The sourcebook has all you need to run adventures in the Talbotverse, but you'll still need the Mythras Core Rulebook for the basic game engine.

The Arkwright Multiverse - Background information, the Grand Metaplot, and where the characters come in.

Character Creation - The basic information on how to create your characters.

Traits, Passions & Dependencies - Characters have special Traits, Passions, and flaws known as Dependencies. These set them above the run of the mill people, but also tint their heroic powers with downsides and weakness which serve to humanise them.

Madness & Other Colours - A hard chapter to read through, this covers Tenacity, psychological conditions and the mechanical consequences of exposure to the horrors of the Talbotverse.

Mind Games - This is missing from the blurb on page 5, but it covers Psionics and Mysticism. In addition to possessing his unique multidimensional talent, Luther is a master of psionics and mysticism. Your characters may not have Luther's singular existence and there may be parallel versions of them in a bunch of 'verses, but at least you can have someone who is a master of both Mysticism and Psionics, too.

Technology - Here's where the Steampunk comes in. Weapons, armour, tools, equipment, and various sundry paraphernalia, all given a modern Steampunk twist, including using tech from different parallels.

Firearms & Combat - Basically, everything from Mythras Firearms began its story here. This was probably the first Mythras supplement to cover firearms combat, and this sourcebook includes science fiction weapons such as vibro beamers.

Vehicles - This is about how people get around both within and between 'verses. There are airships.

Parallels - Information on landmark parallels, and how to create your own.

Games Master Resources - Advice to Gamesmasters on running Arkwright adventures and campaigns, and stats on the major characters.

On Thin Ice - An ice age grips Parallel 13.16.94, and the Disruptors are planning something bad. In this adventure, your Agents must go in, find out what they are doing, and stop them.

The Arkwright Saga - The Grand Metaplot was explained in the Introduction, but here is where the book summarises both of Bryan Talbot's books. No substitute for reading the originals, mind you, but if you cannot find The Adventures of Luther Arkwright or Heart of Empire, these will have to do.

The fashions, and the mores, may be more Nineteen Seventies than Eighteen Seventies, but Luther Arkwright is proudly Steampunk in the manner of Jules Verne and H G Wells. Your characters might be content with driving around the English coast in Minis and making phone calls from iconic red telephone booths, and wearing late Seventies and early Eighties styles ... a fashion nightmare ... and the tech level available to the Agents effectively allows them access to modern conveniences though with a steampunk twist.

Page 22 lists the different technological eras, ranging from the pre-industrial (roughly the late 1700s / early 1800s) through to the Nanotechnology and Spacefaring. The parallels which are of interest to the Disruptors would seem to be those which have a developed industrial base of some kind, often with a distinct reliance on steam.

This setting is not for the faint of heart. The multiverse is not forgiving, and the price of failure is usually a bullet in the head. With stakes as high as the fate of entire parallels, the characters have to enter each battlefield world with circumspection.

Luther Arkwright is as much a game of tradecraft (espionage) and intrigue (shifting loyalties, betrayal, treachery, mysteries, string pulling, suspense) as it is a science fiction steampunk romp.

Luther Arkwright: Roleplaying Across The Parallels is as quintessentially British as Doctor Who, fish & chips, and spelling colour with a u. Bryan's incredibly-detailed graphic novels draw an unmistakably British filter over the world. This sourcebook honours this by setting many of the adventures in some parallel or other of London, but you don't have to stick to London to set your adventures.

It does, however, make for some truly bizarre imagery to see Union flags flying over Government buildings in Cleveland, Ohio, or Tokyo, and all the locals stopping at 4pm local time for tea. This is by design. 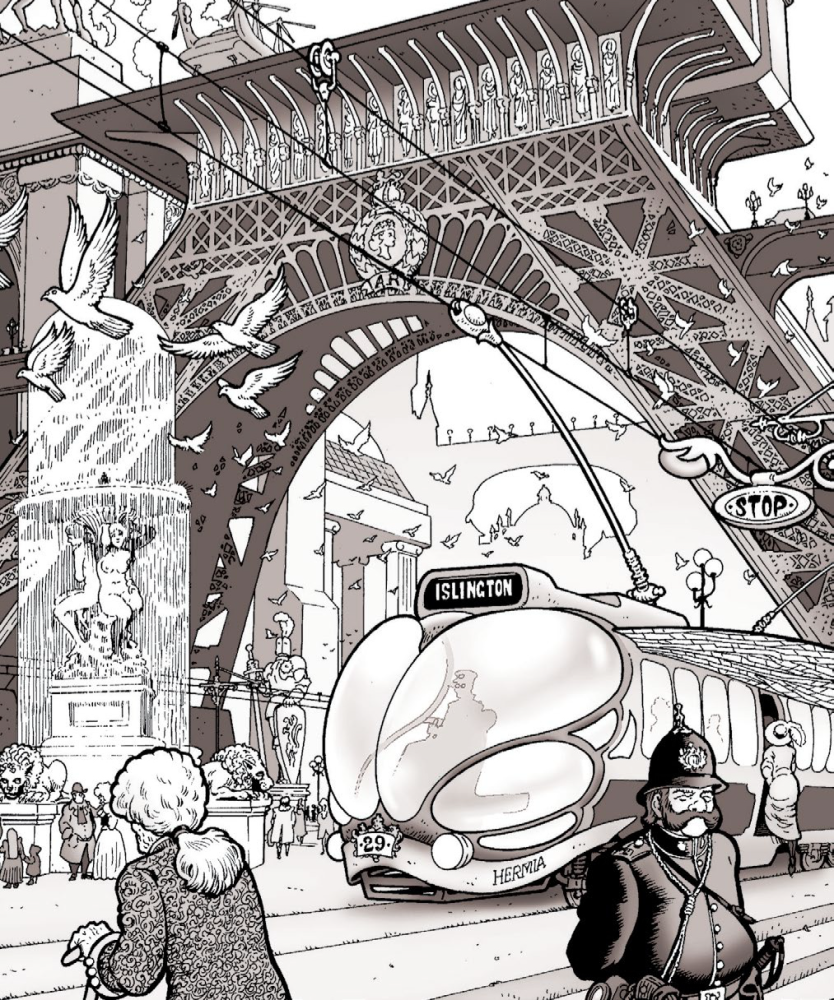 This book is available from The Design Mechanism's new store, in both PDF and hardcover. The game has been available for many years - it was originally a RuneQuest title and bore the RQ imprint - and in light of news that Luther Arkwright had been optioned in '21 for a TV series, as well as the next Luther Arkwright graphic novel set to be issued on 14 July 2022, this sourcebook - and its adventure supplement Parallel Lines - deserve to be revisited.