This blog post takes a look at Monster Island (MI). Monster Island Companion (MIC), and A Bird In The Hand (ABITH) will be covered in a separate post.

First things first. There is a beautiful, loving dedication on the title page, which sets the tone for this document, and provides the biggest reason for you to buy this much-loved supplement.

For Lynn Willis & Ray Harryhausen
In memory of two great men, giants of their respective crafts whose art has left an enduring legacy. Lynn Willis\, who was my mentor and gave me my start in professional game writing; and Ray Harryhausen, a man I never met, but whose monsters have never been surpassed. Both of you spurred my imagination and haunted my dreams. May you rest in peace, buoyed by the wonderment your creations have inspired in me, and others, since childhood.
This book is a fruition of your influences.
PN

There are some things you can read, but you can't really point to specific words or phrases. How can you pojnt to a turn of phrase which shows fear, or anger ... or love? In this case, MI is a labour of love, and you can see it in every word.

Monster Island is a sandbox setting. You can place the island in any maritime setting in your fantasy world, though it is recommended that the Island should be located in a subtropical or tropical setting. The map is reproduced below. 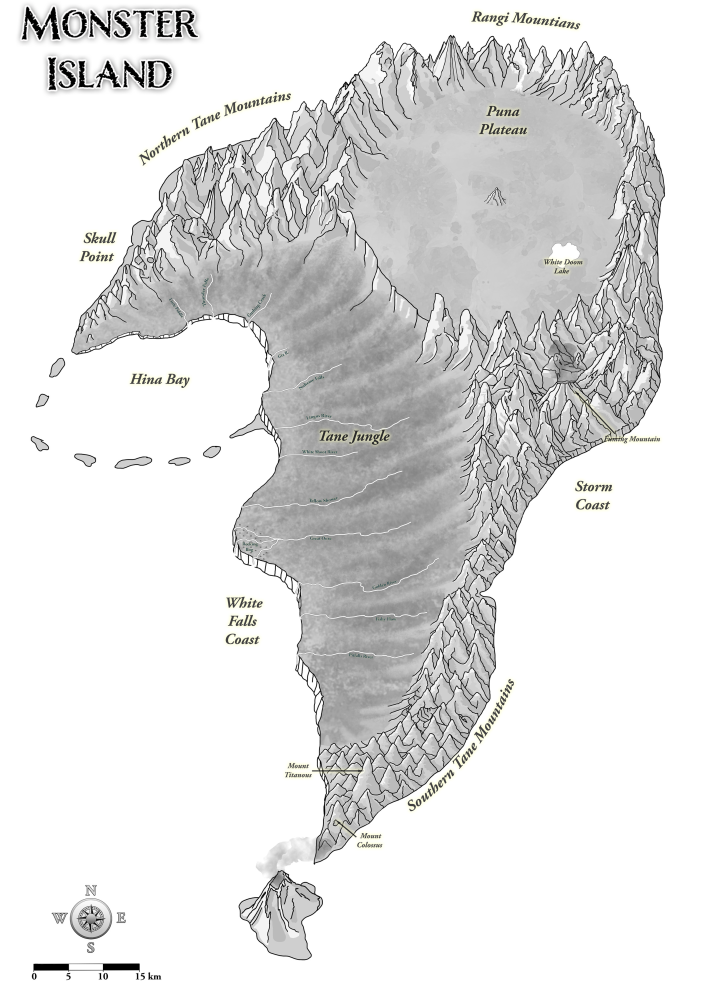 Monster Island is a tribute to every kind of Lost World, Kaiju, or "jungle lord" comic and movie ever made. If you want to run an adventure based on Arthur Conan Doyle's The Lost World, or a fantasy equivalent of Michael Crichton's Jurassic Park, or Edgar Rice Burroughs' (or William S Burroughs') Tarzan or similar (e..g Sheena, Queen of The Jungle), then this setting is great. If you want kaiju in your setting, this island is the place where you will find them.

The Introduction makes useful suggestions. They are pretty inspirational, to be honest - Lemuria, Mu, Nehwon, Skull Island. Lost temples overrun by jungle, atavistic civilisations, non-human cultures, MI can stand in for any of these.

The main book introduces the Island: its environments, its cultures, and its dangers. MI is a huge bestiary for creatures and plants not found in the Mythras Core Rulebook. Poisons and diseases are also covered, along with expansions to the Core Rulebook's magic systems, and powerful new antagonists to pit your Adventurers against.

Each chapter of MI describes an aspect of the Island in detail: The Island (Chapter 1) describes its geography and topology, weather, mountains, coastline, jungles, ecology and hazards, from heat stroke and dehydration to diseases and poisons, not to mention the risk of being stomped into a stain.

Here's what you'll find in the pages of Monster Island.

Chapter 1 is titled The Island.
Chapter 2 is titled History and Cultures.
Chapter 3 is Settlements.
Chapter 4 is about Places of Interest.
Chapter 5 focuses on Campaigns.
Chapter 6 is the Magic chapter.
Chapter 7 looks at Items and Substances.
Lastly, Chapter 8 lists Flora and Fauna.

Chapter 1 strives to cram in as much geology, biology, and culture into a small island with a tiny volcanic isle just off its southern cape. As monster islands go, it has a little more intensity than Columbia Games' equally famous island of Harn - but Monster Island does have something Harn does not. Kaiju.

The island rises over three kilometres between the Southern coast and the rugged Northern peaks. Black volcanic sand predominates, and the fertile volcanic soil is rich in nutrients. As a result, jungles sprawl across most of the island, only terminated by altitude and decreasing temperatures.

The terrain types are coastal (black volcanic sand), cliffs, jungles, cloud forests, a plateau, and high mountains.This ia an island of steep ravines, towering peaks, and dense, primal forests and jungles, and stark contrasts between the highlands and lowlands. 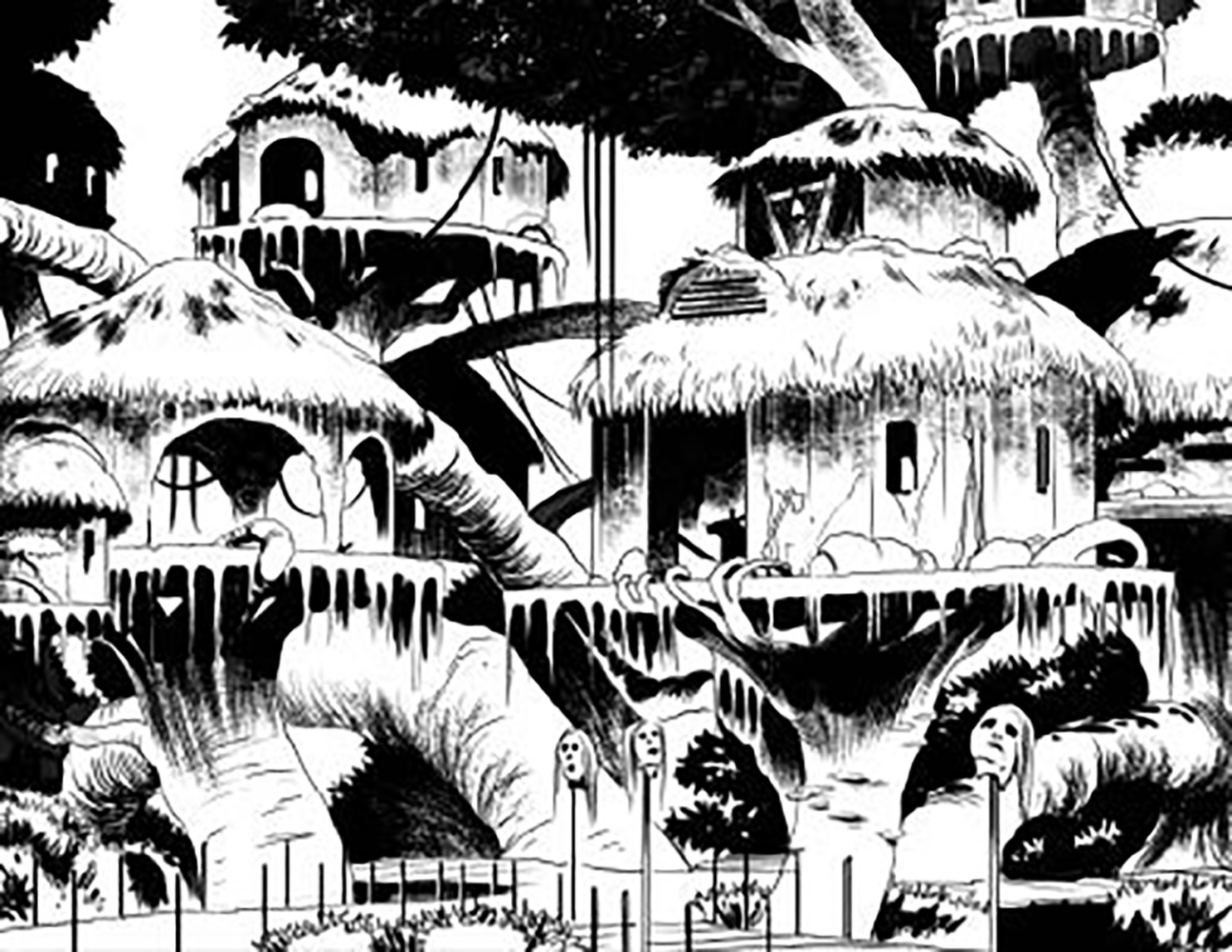 Chapter 2 highlights and describes the cultures and tribes present on The Island. Magic is integral to life here. Sorcery just ruled this island, and visitors can come from anywhere, stepping through the Smoking Mirrors - interdimensional portals, which VALHALLA would kill for.

This is a place where histories have come and gone. By definition, since ruins abound here and ruins are the skeletons of dead empires.

Reptilians: Although the default species of High Folk and Savages are Reptilians - Ophidians versus Lizard Folk - you can make the base civilisations Human, or Bestia, or Acephali, or even Monacielli if you like. However, the default beings living on Monster Island are themselves reptile folk.

The hierarchy of the tribes of the lower reaches of The Island is ... complicated.There are clear demarcations of tasks. Who is in charge depends on location - whether one is inside the villages, as compared who outside or between the villages.

This whole section needs to be studied. Societies on Montser Island are complicated, fluid, and often vicious. Two neighbouring villages might conduct amicable trade with one another one day, and savage warfare the next, seemingly on a whim or a change of wind direction. 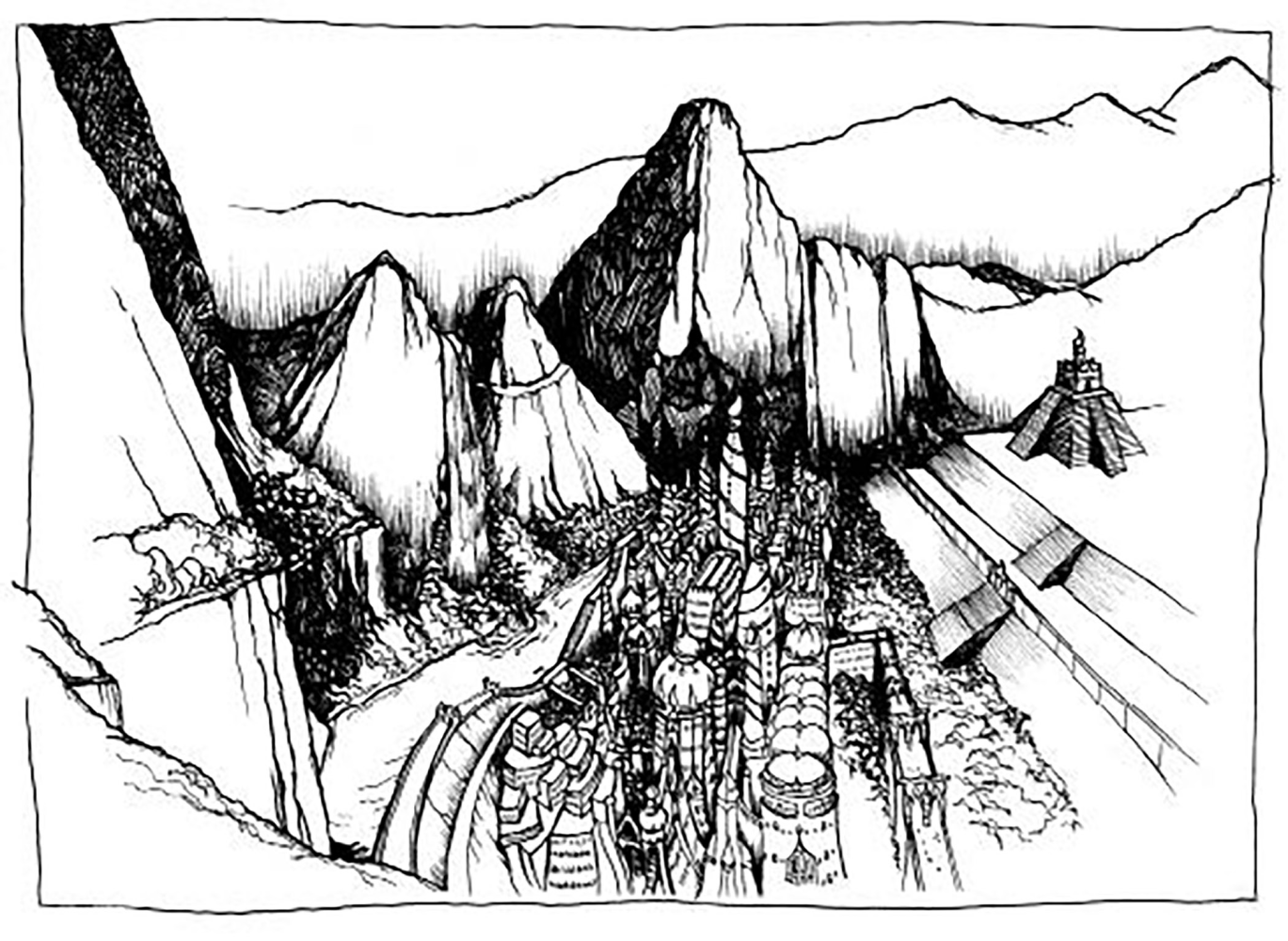 Chapter 3 moves on to describe the major settlements and notable personalities.

Locations such as the Savage capital, Puuiki, and a High Folk citadel called Akakor - all basalt, obsidian, and brass - are described in vivid detail. The Avenue of Delights is a sculpted, landscapred garden in Akakor, where strange plants emit soporific and narcotic scents which induce various weird, druglike effects such as amnesia, euphoria, or synaesthesia.

Animism rules in the Savage lowlands, but sorcery rules among the High Folk.

And then there is Port Grimsand, the human enclave. It has all of the charm of a typical human fantasy settlement, but the feel is definitely Colonial. They may have much to offer the Adventurers, but they are definitely unwelcome among the lizard folk, who probably keep a wary eye out for the primates' antics.

By the way ... Lord Greystone. Yes, it is one letter away from the ER Burroughs character. His son could be all grown up and swinging on vines in the jungle to this day, clad only in a loincloth and bellowing into the woods to summon his animal friends.

Chapter 4 moves on to Places of Interest on The Island - locations where adventures take place. The Causeway of The Nightmarchers is a literally haunted road. Warrior ghosts decapitate the unwary and the foolish. The Cliff Face Dancers are immense bas reliefs carved into the Western cliff face in ancient times. Each of these figures is a representative of a Savage tribe, and they move. They are fetishes for gnomes (Earth elementals) and they are venerated by the lizard folk tribes.

The Fane of The Black God introduces a little bit of cosmic horror, and another species dwelling on The Island - ghouls.

Other locations include The Hanging VIllage, Harojama's Tower (yes, it is an evil wizard's tower), and The Heads of Anak Krakatau, and oh gods they're all Vaal from the Star Trek TOS episode "The Apple."

The Obsidian Rift is next, and adventures set in this location involve stories about plundering the riches of the Earth, and how the Earth strikes back. There is a particularly insidious curse attached to the gold mined here.

The Petrified Forest is reminiscent of a somewhat grim J G Ballard story, The Crystal World, which posits a world where Nature can catch a disease like humans' Hansen's Disease (leprosy), draining away the life force from a region of The Island and leaving behind a glittering, crystallised, barren, silent forest. Of course, in addition to the back story, there is also a gorgon somewhere in this region. 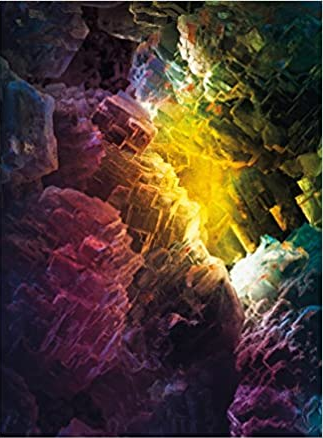 Then there is Screeching Mountain ... and the Iqari, of course. And why not throw in harpies just for fun?

No harpies. But they do have ancient battle armour ... apparently designed by Tony Stark.

Next is The Sepulchre of Soleks ... and it looks like someone's created the Mythras answer to Tomb of Horrors. Straightforward dungeon delve, avoiding traps and fighting off monsters.

There are more locations - Smoking Mirrors, The Temple of Yhounkehd, the Valley of Ivory Doom, and many others. This entire chapter is just chock full of them.

This, then, is the first half of Monster Island. It is a whole campaign setting, a land of treachery and brutality, a land of mystery and intrigue, and a place of wonders and horrors. This whole article has focused on the who, what, and where. Next week's part will look at the rest of the sourcebook, beginning with Campaigns - ideas for Gamesmasters on how to use Monster Island.