Last night was my first time GMing Runequest. As a veteran GM of DND (all versions since 2) and Call of Cthulhu, the challenge for me was making sure that I effectively communicated just enough Glorantha lore, system feel, and fun all in one evening. I think it went well. I did a lot of prep for this game, with most it focusing on making sure I had blocks of text to introduce lore, and that my players had the resources to engage with the combat system. Example: https://docs.google.com/document/d/10uZrm72-Sd6_CAA0L8tWetBnomVZqw9Bw2QHuetI2zA/edit?usp=sharing I recognize that there are probably errors in that document. Feedback is appreciated. Try to see all the newness through a new player's lens!

My players chose from among a pre-selected sub set of the starters. I included the complete rules text of every one of their spirit and rune spells, including the stat for the rune they were associated with next to it. The goal being to not have to flip through a book or packet in order to know what they could do. I began by reading the "blurb" at the start of the QuickStart and added in some specific information about the Dragonrise. My players were really interested in the in media res aspect of starting with a cataclysmic event.

I began by just having them walking through Apple Lane and seeing a sign advertising the need for a group of heroquesters to protect local cattle. This was a good opportunity to emphasize some culture of Glorantha and I had them make some culture and homeland rolls. The fruits of these rolls were gaining some reasons as to why their characters would want to take risks to protect cows. I tied these reasons to their passions as well, particularly loyalty and devotion to temples. This provided a further opportunity to talk about passions and augmentation.

I introduced Brightflower, who served as a strong intro NPC to give them further reasons to help. I also used this as an opportunity for them to introduce their characters using the italic text on the sheets. Brightflower played off of each one after they gave their little speech and I used her as a vehicle to give the players some insights into the motivations of their characters, given how new everything was.

The big challenge of the first adventure of a brand new game is that players really don't even know what questions to ask. So, as GM, my job becomes finding creative ways to feed them information from the adventure text questions, without it seeming canned. I think I did a good job of bringing up some things to get them thinking. They took the job and suggesting bothering after Brightflower offered the 50 Lunar. They lead with room and board as an add-on, but Brightflower was so impressed with their Critical success roll on Bargain that she upped the sakkar fee to 100 Lunar.

She fetched Heotarl (who I nickname Tarl, because I find Heortarl awkward to pronounce) and they set off for the Gejay Hills!

I portrayed Heortarl as written in the text, being a bit overeager towards heroquesting. I went and had him express marriage interest in one of the Adventurers as a way to introduce the "forwardness" of Glorantha social custom. My players did a great job of playing off of what I was doing. I was able to include in the information that Heortarl is designed to give the players about ignorance of the ruins, as well as setting up the Orlevings as an antagonist.

Upon arrival at the herd, I used Jareena as a counterpoint to Heortarl, with her chiding him for his "frequent proposals" to young women. One of my player's played Nathem and asked if she could send her Shadowcat on a scouting mission. I wasn't sure how to play this, given that I don't know the extent to which trained Shadowcat's "follow orders" like familiars in DND. So, I had her roll Nathem's Beast Rune. She got a regular success, which I deemed as not good enough for the Cat to go wandering off away from the safety of the fire. I wasn't trying to say "no," so much as do what I thought was realistic. I also wasn't interested in her losing her shadowcat by it just being eaten by sakkars, although maybe that was the most exciting play. Let me know what you think about that?

The group followed the cattle the next day, as written. My players made judicious use of Scan and Search to find some sakkar scat. One of my players rolled Critical on Scan and noted a significant rustling in the grass right before the sakkars attacked.

Cattle Raid suggests that the sakkars don't want to fight humans. While I totally understand that from a Runequest flavor perspective, I was getting the impression that my group was ready for action, and it was starting to get late anyway. So, I elected to have them fight to the death.  Here is the map I prepared for the encounter. Solid lines are increasing elevation and dashed lines are decreasing. The X is where the sakkar attack occurred, and the circled letters refer to the herders. T is HeorTarl. 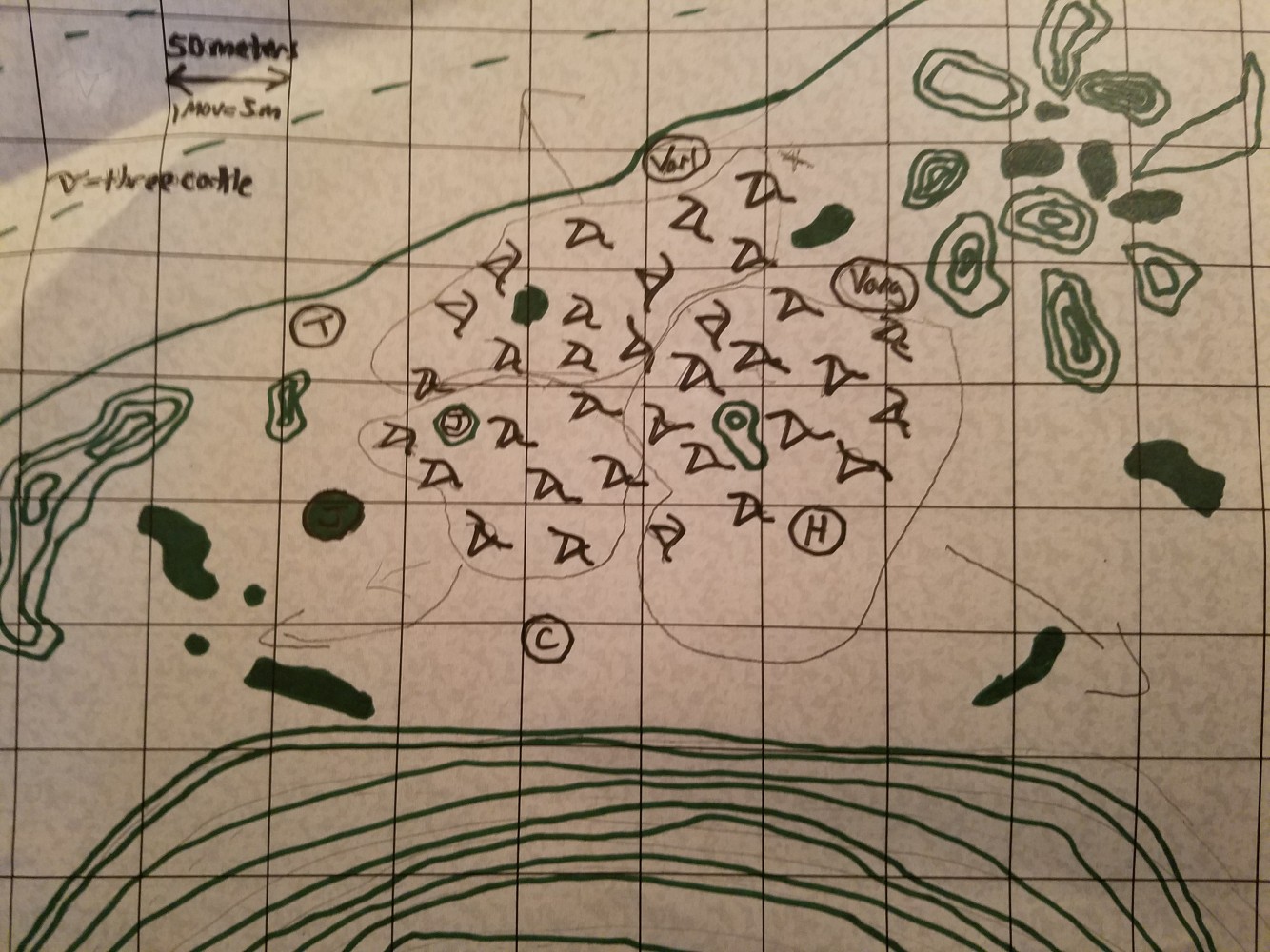 I asked the players how they planned to move with the herd and they elected to spread out. I deliberately made the scale large to increase the tension. I also made a point to emphasize with them that the down slope towards the upper left of the diagram leads to Orleving farm lands. My players did discover that the Varmandi had been grazing within Orleving boarder stone boundaries prior to this. This close proximity made them appropriately nervous.

The sakkars attacked! My plan was to keep them near the kills and to feed on them, until anyone chose to intervene. With my players being spread our over the whole map, the challenge was getting them involved with combat and not be sidelined just because of positioning. Vostor was the only one close to the attack, and he elected to use his javelin as a melee weapon. A big part of this first combat was players figuring out "how this works" and I think they did a fine job given the newness and circumstances. They did a good job of attempting augments with skills like bargain, homeland, culture, etc, but really struggled with the idea of augmenting weapon attacks. This is my fault because I could have done a better job of emphasizing that weapons could be augmented too! The "it is whatever it says on my character sheet" mentality is potentially a barrier for people coming over from other games, because skill augmentation is pretty novel for most role-players.

Mobility was the most commonly used Spirit Magic and the player playing Yanioth was absolutely dead set on making the biggest Earth Elemental possible to deal with the threat of the sakkars and I couldn't blame them.

The beginning of the combat was a brief introduction to how Strike Rank works and the logic of it was well-received by my players. The first few rounds were largely positioning rounds and getting out of the way of cattle. I had the cattle split into three main groups, and having the map really helped here. Players really had a lot of positioning choice and many of them were adept at "finding the gaps" between the three groups to avoid being trampled. Everyone had to make at least one DEX roll and nobody was trampled! But the THREAT of the trample played out really well and definitely influenced the sense of threat.

Vostor immediately took a savage gut swipe to his abdomen from the big male sakkar. 17 points to that one location! I basically was fudgy on the movement rules during this section. I recognized that the scale I provided for the map was perhaps a little too much on the harsh side for the combat, as some players were starting hundreds of meters away from the battle. They used Mobility and full moves to get there as quickly as possible. On the other side of the coin, I recognized immediately that I had set it up risking a lot of players just being straight up irrelevant in the battle. Which is not a good thing. So, that resulted in some generous movement responses to player decisions. I didn't play it perfectly by the numbers, because if I did, it really would have punished some players who basically made the logical choice to protect on all sides.

That said, Harmast was close enough to Vostor to be able to get to him with a healing potion. We did the Strike Ranks accurately (Dropped weapon, 5 SR take out potion, 5 SR administer) but I did fudge the movement a little.

With mobility, Vasana and Yanioth were able to cross the field and get to the threat by the fourth round. Yanioth dropped all four of her Rune points to make a medium elemental and used it to engulf the female sakkar. Vasana trampled it's head with her Bison, killing it. Harmast made a special success sword attack against a failed parry of the male sakkar and it went to the head! It didn't quite do triple damage to the head, but given that it was at less than zero main hit points, I called it a beheading.

Where was Nameth this whole time? Nameth ran after Heortarl to guard against any shenanigans with the Orlevings. I had Nameth see two riders in the distance. She (the player) grappled Heortarl to prevent him from doing anything stupid. She wasn't able to wrestle him to the ground. Deseros and Erlanda approached and I played out the expected threats between them and Heortarl. Kari did a great job of rune and passion augments to bargain with them. With a great speech, a logical augment, and a good roll, she talked them into only taking half of the cattle from this sub herd!

So, all told, the group only lost 18 cattle and managed to eliminate the sakkar threat. Yes, I know that cuts across the "sakkar run" tactic of the scenario, but based upon the combination of time, table feel, and this being their first adventure, I felt that it was appropriate to have a longer fight. Even if that cuts against the "monsters and people flee" rule of Runequest. We did get the cultural thing in at the end with Nameth and the Orlevings and the negotiation.

Most importantly, they want to play again. So, the current plan is to play Defending Apple Lane for our next session!

1) What do you think about the Shadowcat situation above? Do Shadowcats "follow orders" like familiars? Whether they can or not, how would you have avoided an effective "no" under that situation?

2) Is an elemental's damage physical or magical damage? In other words, does Armor apply? I wasn't sure in the moment, so I made it physical, with the hope being that Yanioth would roll a 4, 5, or 6 on its damage to overcome armor. She rolled a five, and it was appropriately epic, but I'm wondering if I played it correctly. It just seems odd to me that you'd drop four rune points to control an elemental, roll a two for damage result when it engulfs, and have the elemental do no damage to a foe with armor. Seems a potentially huge waste of a large rune point investment.

3) I wasn't sure how creatures with natural weapons "parry," so I just used their claw statistic. Correct?

4) Any skill not in any NPCs list happens at base value, correct? The biggest aide that was missing was a list of skill base values, and I will have that for the next session.