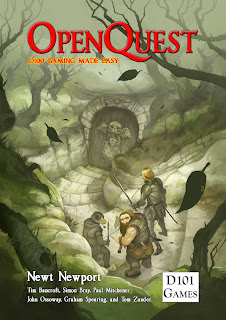 As Newt Newport mentions in his introduction to OpenQuest's rule set, the "Open" in OpenQuest refers to the ability to create fantasy settings and characters in a completely unrestricted manner. This is in distinct difference to Mr. Leary's approach to the genre with "Classic Fantasy", a Chaosium monogram. Classic Fantasy attempts to model Dungeons & Dragons directly to the Basic Role Playing D100 system.

Leary hews closely to the Dungeons & Dragons cannon by first identifying the types of characters players are able to play. A characters "Class" is all enveloping in the world of Gygax,its game function mainly concerned with resolving the characters combat interactions and whether or not the character survived the encounter. Each class has the requisite limitations which define these capabilities as compared to those of other classes. A players choice of race also carries the same net of limitations which further narrow the scope of capabilities, and therefore define the player character.

Newport's fantasy mash up, on the other hand, begins character creation with a brainstorming session, requesting each player to come up with a character concept. As the author explains; "A character concept is a one sentence summing up of what the character is all about." The rule set continues on as a guideline in how to translate the character concept into your fleshed out character sheet. I love this type of game experience myself where the initial player character, while not all that powerful yet, is still a product of my imagination. I was quickly able to come up with intriguing character concepts off the one sentence rule. It started to become a game of interest and brevity; Disturbed Wizard, Searching Sailor, Cashiered Ranger, Disgraced Warrior, Hunted Magician, Retired Gladiator, Etc... If you are manic about gaming all the best aspects of fantasy found in literature, or being open to new inspiration you can do this well with OpenQuest

But if you are looking to go Gygaxian, you should go with Classic Fantasy because, well, Leary has already gone through the trouble of converting the standard classes, races, and spells. A lot of hard work, I assure you. Unlike Dungeons & Dragons retro-clones, launching a D&D campaign with BRP's Classic Fantasy does allow much more in personal customization of your character class, mostly do to the use of a skills list, and the players characters are more robust overall. Running some friends through TSR's B10 Night's Dark Terror proved Classic Fantasy characters can chop through goblins and minor undead well. Proper tactics assure swift death to surprised opponents. True to BRP form, once these tables are turned on players, swift death can ensue. All in all, Classic Fantasy will give you a great D&D game without the garbage mechanics of Old School, retro or otherwise. Those who do not like a d100 system should not even bother.

And that is why I use OpenQuest. If you are looking for a great system for your own fantasy creations, classic or otherwise, OpenQuest gives you the tools to go right at it! It does put more weight on the Game Master. The GM will have to be invested in the brainstorming session during character creation with the players. Or the GM can offer pregenerated characters. Either way, it means more hands on time by the GM. For me, this takes the form of ripping off literary sources, as well as available game aids to create classic fantasy adventures.